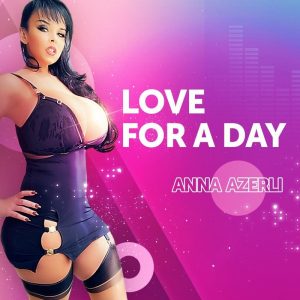 California-based pop artist Anna Azerli has traveled a difficult road to get to where she is today. Born in New Zealand, she moved to Berlin at a young age after her parents’ death. At sixteen, she then moved to Milano, Italy, where she studied at the Accademia Teatro all Scala. There, she became a protege in the field of opera singing. However during the 2009 economic crisis, opera houses began to shut down, so Azerli began pursuing pop music instead, which prompted her move to the US. Since then, she’s released two singles and was preparing for a permanent show in Las Vegas until the pandemic shut most entertainment venues down.

But despite all her challenges, she has still found a way to create and release some beautiful music. Her most recent release is a single titled Love for a Day, and it perfectly embodies her modern pop sound while still featuring her impressive powerhouse vocals.

The production on this track perfectly complements the song, with gorgeous keys and a few soulful guitar riffs gently leading us into the first verse. Strings join shortly thereafter, building slowly to the chorus where the percussion enters and the song opens up. It’s a soaring, evocative ballad all around.

Azerli’s vocals are the star at the center of the song and they are unquestionably impressive. Her classical training shines through in her performance in this song via her strong vibrato, but it only adds to the character of her voice. A true powerhouse, she hits all of the highs and lows of this song with ease, infusing raw, vibrant, authenticity into the track in a way only a truly talented vocalist can.

Overall, Love for a Day is a stunning soft-pop ballad, complete with exquisite vocal work from Anna Azerli and the perfect production choices to match. With a possible return to Vegas slotted for 2021, along with some recent work with an up and coming reality TV series, it’s clear the sky is the limit for this talented artist, and we look forward to seeing where her career takes her next.

BELOW:  Listen to Love for a Day and connect with her social media platforms. Please support  Anna Azerli by visiting her online, and playing, downloading, and/or purchasing her music, or attending a live show! And, as always, thank you for supporting real music!

Listen to LOVE FOR A DAY by ANNA AZERLI: