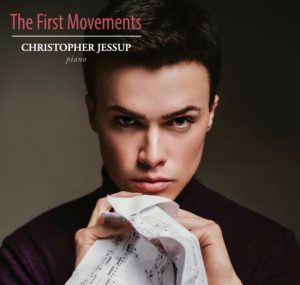 Award-winning, Juilliard-educated, frequent Carnegie Hall performer Christopher Jessup has a musical resume that many classical musicians only dream of. His list of accomplishments is vast – his compositions have been performed by the JuilliardOrchestra and the Brno Philharmonic, he has recorded albums for record labels Navona and RMN, he has appeared as a soloist with the Camerata Artists Orchestra in New York, the Virtuosi Brunenses Orchestra in Italy, and the Alicante Philharmonic in Spain, and he has received numerous recognitions and awards from National Sawdust, Steinway & Sons, ASCAP, and NPR.

With a career like this, the bar is set remarkably high for any new releases from Jessup. His most recent project is an 8 track album titled The First Movements. According to Jessup, the concept of this album was to exclusively play the first movements of several cornerstones of the piano repertoire, creating what he describes as a “tasting menu” of both his piano abilities and the compositions themselves. This is no doubt a unique approach to a record, but as one might expect, the execution and performance featured on this collection of tracks are nothing short of awe-inspiring.

It is immediately apparent from the opening measures of The First Movements that Jessup is in a league of his own. In the introductory track Keyboard Sonata in B Minor, Hob.XVI:32: I. Allegro moderato, we are greeted with intricacy, intensity, and smart emphasis. His performance is needle-like in the precision of execution but still delivered with softness and warmth. And these key features are something we find across this album in droves.

Beyond the technical abilities of his execution lies his ability to impart emotion. Where other artists in this genre can have a monotonous underlying feel to their work, Jessup deftly moves from feeling to feeling, bringing a light and airy brightness with Piano Sonata in D Major, K. 311: I. Allegro con spirito, followed immediately by a rounded, pensive melancholy with Sonatine, M. 40: I. Modéré. The ability to move so easily between these wildly different tones on a single instrument indicates superlative skill.

And as we listen through the remainder of the tracks, each one is a distinct pleasure of its own – the electric energy at the peaks of Italian Concerto in F Major, BWV 971: I. Allegro, the bold intensity in the second half of Piano Sonata No. 13 in E-Flat Major, Op. 27 No. 1: I. Andante – Allegro – Andante, and the flowing, dreamlike tones of Piano Sonata in E Minor, Op. 7: II. Andante molto. Each track highlights the graceful, effortless nature of Jessup’s performance despite the nuances of each individual piece. 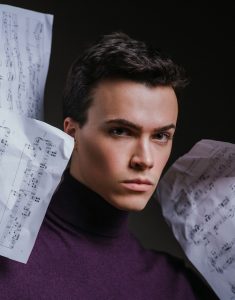 We find on this album exclusively Jessup’s renditions of the work of others until we arrive at the final track, Le Revenant. A composition of his own, this piece is a remarkable standout on a collection of already impressive tracks. From a dissonant beginning, the piece evolves into a wave of the unexpected, with a sharp, bouncy cadence and a permeating sense of darkness throughout. It’s absolutely intriguing and decidedly modern, leaving us extraordinarily interested in hearing more original works from Jessup.

Every accolade and recognition that Christopher Jessup has received has been absolutely warranted. His performance skills are of the highest level, showing true mastery of phrasing and inflection and creating emotion and intrigue through his simplistic style of execution. Despite (or perhaps at times, because of) his unorthodox and intriguing method of track selection for this project, Jessup’s work on The First Movements sets him a head and shoulders above the rest, putting him at the top of his field and cementing his position as one of the premier piano soloists currently performing. His work is nothing short of engaging and brilliant.

BELOW:  Listen to The First Movements and connect with his website and social media platforms. Please support Christopher Jessup by visiting him online, and playing, downloading, and/or purchasing his music, or attending a live show! And, as always, thank you for supporting real music!

Listen to THE FIRST MOVEMENTS  by CHRISTOPHER JESSUP: