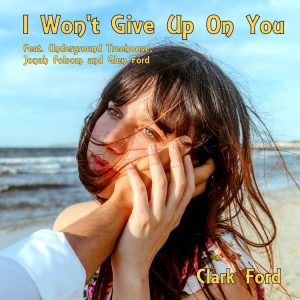 When we last heard from Bongo Boy Records’ resident prolific songwriter Clark Ford, we were treated to the twangy, heartfelt country hit In Your Eyes. Now Ford is back with another release on the label, moving decidedly in a pop/rock direction this time around. I Won’t Give Up On You features Underground Treehouse, Jonah Folsom, and Glen Ford, and further exemplifies the compelling, relatable songwriting abilities that Clark Ford possesses.

Starting with rich, a capella harmonies, I Won’t Give Up On You quickly settles into a quintessential bouncy pop rhythm. The instrumentation, while guitar driven, is fairly laid back, allowing the vocals remain a highlight throughout the single. They provide a combination of accessible pop tones and occasional technical runs that create variance and texture throughout.

As one might expect, the songwriting on display in this track is also noteworthy. Ford excels at creating stories in his lyrics that are crystal clear and comprehensible – his straightforward lyrical approach allows his message to be unquestionably heard. This single is no exception to that rule. The chorus is an unwavering mantra of support and steadfastness in the face of adversity:

Bright and uplifting, I Won’t Give Up On You is as catchy as it is encouraging. Demonstrating the clearly impressive range of Clark Ford as a songwriter, and doubling down on his ability to surround himself with just the right musicians to bring his composition to life, this track is no doubt reminiscent of the lighter side of the likes of NSYNC and One Direction, and is sure to resonate with fans of that iconic pop sound today. Stream I Won’t Give Up On You and dive into this hopeful, summery single for yourself below.

BELOW:  Listen to I Won’t Give Up On You and connect with his website and social media platforms. Please support Clark Ford by visiting him online, and playing, downloading, and/or purchasing his music, or attending a live show! And, as always, thank you for supporting real music!

Listen to I WON’T GIVE UP ON YOU by CLARK FORD: