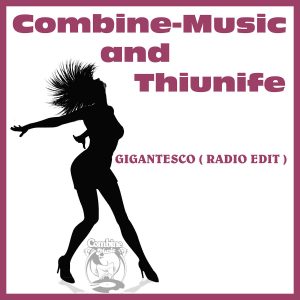 Based in The Netherlands, DJ, artist, and producer Orlando Anson (AKA Combine-Music) has a long-lived music career that began in the ’80s. Originally known as Mr. Magic, Anson first worked as a rapper and party host with a company called Panna Event. After purchasing a set of turntables, however, Anson began performing in various clubs, combining his skills as both a rapper and as a DJ in one place. By the ’90s, Anson began producing his own music and eventually music for other artists as well. In the early 2000s the name Combine-Music was born, and in the years since he’s worked to further develop his unique musical identity and expand his original catalog.

Currently available on Bongo Boy Records is one such original release. The Combine-Music single titled Gigantesco premiered on February 22, 2022. Featuring Thiunife, this uptempo, vibrant number is a great introduction to the distinctive styles and rhythms that characterize his work.

Immediately electric and textured, Gigantesco is a party track at its foundation. Combining a captivating collection of synths and organic percussion, aside from its clear hip-hop roots there are notes of EDM and Latin music interspersed throughout this track. It is high energy from beginning to end, full of danceable rhythms and catchy melodic phrases that point to Anson’s skill as a producer.

Both the vocals from Combine-Music and Thiunife are incredibly well suited to the track. Thiunife’s voice is rich and sultry, her alluring tones working well to sell the story of a striking dancer at a club making the most of her night. Anson’s voice is a great complement – though only appearing briefly, he has a gritty, cutting tone to his voice that works well against the smoothness brought in by Thiunife.

Once again we find a gem of a track brought to us by no other than Bongo Boy Records. Gigantesco is an intoxicating, vibrant hip-hop number that would make an excellent fit for all of the upcoming carefree summer playlists we’re already thinking about putting together. Stream this dynamic single from Combine-Music below and enjoy some uninhibited dancing of your own.

BELOW:  Listen to Gigantesco and connect with their website and social media platforms. Please support Combine-Music and Thiunife by visiting them online, and playing, downloading, and/or purchasing their music, or attending a live show! And, as always, thank you for supporting real music!