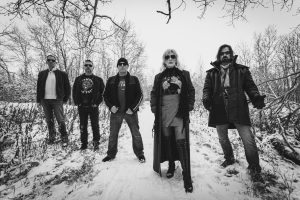 In a world where six minute progressive explorations and never-ending genre hybrids often take the front seat, a band looking to create nothing more than authentic modern rock is a breath of fresh air. We’re grateful for bands like Winnipeg, Manitoba based group D2UR, who define themselves simply as a “straight ahead, no frills rock band”. This simplistic yet totally effective approach is on excellent display in the band’s most recent single, Slippin’ Away.

D2UR was founded by Mike Isbister and Diane Isbister, and now also features John Colburn (bass), David-Sikorskki Thorn (guitar), and Stephen Broadhurst (drums). They originally met at Tec Voc High in Winnipeg, as members of the school’s highly regarded musical program. The band has been releasing music since 2013, beginning with their debut album Rev Up, of which one track placed in the top 25 in the 2014 CBC Searchlight competition. They later had a track finish in the top 10 of that competition, as well as another that placed 15th in the CJIM Montreal Independent Rock Countdown in 2016. With all of their accolades, the bar is set fairly high for D2UR’s most recent single – but to no one’s surprise, it’s a dynamic, well-crafted piece of music that both aligns with the band’s core artistic goals and is easy for nearly anyone to connect with in these wild and challenging times.

Like many of this year’s great songs, Slippin’ Away was written during the early lockdown phase of the pandemic. With their home city’s streets quickly becoming abandoned and fear hanging tangibly in the air, the founding members of the group found themselves drawing inspiration from the chaos, penning the lyrics to this track. They recorded a demo version shortly thereafter, followed quickly by the final recording, a majority of the collaboration being done online.

The track itself is full of high points – bright, clean guitars, powerful and intense female vocals with a great smoky timbre, a perfect mix of complexity and simplicity in the guitar solo, and some great group backing vocals that add a really great layer of fullness. It is exactly what the band strives to create – rock and roll, pure and simple.

The lyrics will resonate with nearly any audience in this day and age, as we all grapple with missing aspects of our lives now that everything has been turned on its head. The cry for a return to normalcy couldn’t be clearer:

Who couldn’t use a fiery rock anthem that puts a memorable melody to one of the biggest challenges of all of our lives right now? Slippin’ Away could be that song for you. For modern rock fans who appreciate an authentic, defined sound, don’t sleep on D2UR. This is well-executed, sharp, and invigorating music, and it has us looking forward to future releases from this talented group.

BELOW:  Listen to Slippin Away and connect with their  website and social media platforms. Please support D2UR by visiting  them online, and playing, downloading, and/or purchasing their music, or attending a live show! And, as always, thank you for supporting real music!

Listen to SLIPPIN AWAY by D2UR: