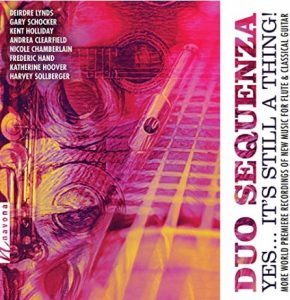 Duo Sequenza are a pioneering force in modern classical music. Comprised of flutist Debra Silvet and guitarist Paul Bowman, their music is the work of two masters of their respective instruments. They have performed worldwide at the largest classical guitar and flute conferences and following the release of their 2019 debut studio album, the duo return with their follow up Yes…It’s Still a Thing! The album contains 19 performances, written by a variety of composers, in most cases, specifically for Duo Sequenza. The compositions encompass a wide range of styles and take the listener on an enthralling exploration of the boundaries of flute and guitar.

The album begins with a Deirdre Lynds’ suite entitled John Doe’s Running, which is split into four parts. The first part is characterized by intense fingerpicking on the part of guitarist, Bowman. Over his fast minor arpeggios, the flute plays a wistful melody – slow drawn-out phrases at the beginning, building to quick colorful bursts. There is an obvious flamenco influence in these passages. Bowman’s chord voicings are spicy and laden with extensions, and the rhythm frequently breaks for him to deliver spicy scale runs.

Kent Holliday’s suite 4 Romantic Songs Without Words is another highlight of this record and features some of Silvert and Bowman’s most inspired playing. The pieces are darker in tone; complex key changes form a rich harmonic base for the flute melody to shine. Bowman’s guitar is especially brilliant in the second passage where a solo, arpeggiated introduction establishes the main theme. There are moments when the guitar is soft and restrained, letting the flute playing float above, and times when the guitar is more aggressive; pushing to the front of the mix with jarring chord-work and lead lines. The fourth part sees a dramatic climax where captivating meter changes accompany the soaring upper-register trills of the flute.

Silvert and Bowman possess incredible technical prowess and have immense synergy together. Once again modern composition serves as the perfect vehicle for their music, and the selection of pieces sees them draw from a well of stylistic influences. Yes… It’s Still a Thing! will impress anyone with an appreciation for classical music, and further cement Duo Sequenza’s place as ambassadors in their genre.

BELOW:  Listen to Yes…It’s Still A Thing! and connect with their  website and social media platforms. Please support Duo Sequenza by visiting them online, and playing, downloading, and/or purchasing their music, or attending a live show! And, as always, thank you for supporting real music!

Listen to YES…IT’S STILL A THING! by DUO SEQUENZA: