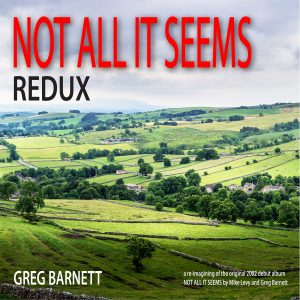 We last heard from Australian artist Greg Barnett just a short while back, after we had the distinct pleasure of reviewing his 2020 release The Flat White Album. This year, Greg has released another project that seems to complete a set of musical bookends for his 20 years of creative endeavors. He’s revived and re-recorded his first ever release, album Not All It Seems, and has revisited these tracks with both increased experience and confidence.

Opening with Fields and Sunny Skies, we dive headfirst into an album that is full of these deep, pensive moments that are rich with insight and reverence. This is gentle singer-songwriter music to its core, accentuating the warmth and textured nature of Greg’s voice in a most wonderful way; you can practically hear the experience he’s acquired in his tone alone. This is mirrored in the inclusion of the strings as well.

Singer-songwriter music that holds an expressive story at its center is often the most satisfying of its kind, and we find this early on in this project in Ferry To The Island. With a well-placed ship’s horn and delicate acoustic guitar lines moving the track along, Greg’s voice takes on just a hint of a weathered element to make his rendition of these perfectly descriptive lyrics from Cynthia Wardle absolutely believable, creating a fully immersive listening experience.

As we’ve come to expect from Greg’s work, moments of lyrical brilliance appear on a regular basis – and this is as true on his 2020 release as it is in these tracks written nearly two decades prior. Mad About It brings us an excellent example of this – a downtrodden number looking inward, asking hard questions and dancing somberly around the answers:

“Will things look brighter in the morning
What can I trust to still remain the same
I’d take an optimistic view but what damn good would it do
Is it bad luck or me to blame?“

Things brighten back up with Cappuccino Crowd, the quintessential coffeehouse song. Easygoing and light, this track leans strongly towards a classic folk execution (perhaps a bit of a John Prine lilt to the rhythmic structure here). We’re treated to another captivating story, fully enveloping us in the bubble of the café, letting the outside world fade away.

Another recurring element within Greg’s work tends to be riveting, unique metaphors for life and the world we live in. In Clay Shapes, we find another of these, this time comparing the work of a potter at the wheel to the trials and tribulations of child-rearing. It’s a highly successful and thought-provoking analogy, especially when one considers the elasticity of children combined with the delicate hand needed to guide someone into adulthood.

Greg also has a penchant for sharp political commentary, his views often taking an angle of unity, togetherness, and hope, as well as disdain for corruption and abuse of power. Pleasant Land seems to encompass all of these elements into a single track. He contemplates history’s effect on the now, and muses on whether or not a brighter future is in the cards anywhere:

As with many singer-songwriters, much of Greg’s work puts a heavy focus on lyrical content, crafting stories and assembling poetic verses in track after track as the primary means to draw the listener in. But in the very last track on this album, we find an instrumental, and it’s a refreshing reminder that Greg is as capable of working with pure instrumentation as a medium as he is with words. In Two Minds reveals much of its construction in the title, with two halves of the song resembling each other exactly in structure, but varying wildly in production. The soft, intimate nature of the first half of this track is in stark contrast to the bouncy, loose, and jazzy nature of its reprise in the second half. It’s a testament to the effect that production has on even components as simple as melody, and as Greg regularly employs restrained, simplified production choices, instances like this are proof that he is well aware of the effect each decision has on the overall resulting composition.

So while it is impossible not to revel in the repeatedly remarkable lyricism on this album again and again, a moment to focus truly on Greg’s arranging and producing capabilities serves to broaden his artistic range and deepen his impact as a musician on the whole.

Even in the most seasoned artists, writing an album that stands the test of time – let alone twenty years – is challenging for so many reasons. Songs that resonate across the decades, stories that age with grace and without losing relatability, metaphors and melodies that avoid becoming dated – none of these things are ever a given for any musician. Despite this, in the revitalization of his 2002 release Not All It Seems, Greg Barnett has proven that even in all the experience he has acquired since his earliest days as a songwriter, his initial musical instincts were strong and compelling right from the start. Everything that he has learned in the time since only serves to fortify what now exists as a wholly well-written and smartly arranged collection of singer-songwriter work on an album that might best be described as timeless.

BELOW: Please support Greg Barnett by visiting him online, and playing, downloading, and/or purchasing his music! And, as always, thank you for supporting real music!