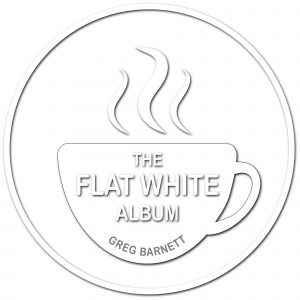 Australia-based artist Greg Barnett has been a musician since his teenage years, but didn’t discover his capacity for songwriting until age 50. In the nearly two decades since, Greg has released three albums: two co-written works in 2002 and 2015, and this year, The Flat White Album. Inspired by The Beatles’ White Album, this extensive work similarly features 30 stripped down, acoustic-forward tracks that span a variety of genres and styles while keeping Greg’s songwriting at the center of it all.

The Flat White Album opens with The C-Bomb, a heavy title followed by heavy content. Clips of politicians denouncing global warming (yes, climate is the C-word at play here) play over tense, dissonant strings in the first minute. This slowly gives way to a strummy, soft acoustic guitar and the entrance of the real lyrics. Greg has a warm, deep timbre to his voice, easygoing and relaxed in this number. And the Beatles influence that Greg has mentioned is on full display right away, with sing-song melodies and complex chord arrangements.

Old Love moves us in a gentler direction. Saccharine and tender, this track is a music-box-style guitar and clean vocals, nothing more. This is a love story of the purest kind, and the standout line “the beautiful simplicity that really works for me” seems to be self-reflective with regard to this piece.

We get a lighthearted taste of Australian culture in Down Here. Jovial and upbeat, this foot-tapping number gives those of us not fortunate enough to have traveled down-under a sampling of everything the country has to offer – from wildlife to geography to local cuisine. The eclectic mix of production gives this track a hearty dose of texture, and the choir effect in the chorus emphasizes a welcoming community feeling.

A Little Death presents a particularly unique lyrical challenge. Here, Greg compares the famously provocative phrase “la petit mort” to the literal act of dying, in a way that is never too suggestive or risqué. There’s plenty of smart word choice throughout, notably lines like, “I feel it’s all coming to an end, that I’ll soon be letting go” and “once it’s over and done is it the same for everyone?” Musically, this track has some dark alt-folk undertones with a generally more modern feel than many of the preceding tracks, a balanced complement to the complex subject matter.

There are a handful of instrumentals throughout this album, a welcome inclusion when much of the music requires an ear intently focused on the lyrics. Guitar Sweet is one such instrumental. As the name suggests, this is a guitar-focused piece, with a simple drumbeat behind smooth and polished acoustic riffs. It’s bright, amiable, and the refreshing kind of simple – nothing overly showy or overdone, just pure and wholesome music.

Hamster Wheel has perhaps hints of Americana and electronic-pop notes, with its rapid-fire acoustic rhythms and a hearty dose of synths. The comparison of the rat race of the corporate world to a literal hamster wheel isn’t entirely original, but the inclusion of some familiar computer sound effects succeeds in breaking the fourth wall a bit in this track. Those small details force a thought – seems as though we all might be in this hamster wheel, too.

The lyrics of Fairytale were inspired by a poem submitted to Greg by an 8-year-old girl. The story is full of the grand imaginative displays of childhood, and the brass and string elements give a rounded, regal feel to this absolutely heartwarming number.

Perhaps one of the darkest moments on the album comes with Losing My Grip. The composition is fairly light, with passing minor and dramatic moments throughout. But the lyrics tell a much more somber story, one of a descent into deep depression and hopelessness. It’s an intense and gripping subject, very interestingly juxtaposed with an almost cinematic manner of production:

Guitar Suite is another notable instrumental, extremely orchestral in its arrangement as the title suggests. It starts on a haunting note, a sole acoustic guitar plucking out a melancholy melody. But as it builds, it gains intensity and momentum, the first half of the track growing to a thunderous peak and settling back down into a reprise of the intro. This track seems to be broken up into movements, as the second half retains a guitar focus but takes a much sunnier approach. It too features an intense build, leaning into ethereal strings and keeping that symphonious feel all the while – and ending on a perfectly simple guitar riff, bookending the track. It’s exceedingly well written and equally as well executed.

Things pick up a bit with The Web, almost folk-rock in execution. The energy and movement here is once again a great complement to the story – a recurring theme throughout this project as a whole. Here Greg explores the metaphor of love as a spider’s web, himself the willing victim to a predatory black widow of sorts. The last chorus has what is perhaps the most compelling section of this track, the layers of vocals creating a rich tapestry of sound.

It should come as no surprise, due to his excellent compositional skills on display across this album, that Greg has done some work in film. On this album, he includes Remote, which was his submission for Australia’s Tropscore 2015 Short Film scoring competition. Though this is a shortened version of the full film’s soundtrack, the selected moments give a wonderful sampling of southwestern Americana, a twangy guitar and bouncy energy that feels like a horseback ride through the desert. (Watch the film yourself here for the full effect.)

One of the album’s most prominent highlights arrives at track 18. Featuring a bright 12-string as the driving force of the track, Take My Advice is produced by Greg but composed and performed by his nephew James Barnett. This track leans in a power-ballad direction, with warm bass tones and light percussion accompanying a spectacular string arrangement. The vocals of James Barnett are also a wonderful addition; he brings a modern timbre and a hint of rasp and smokiness to the track.

The intro riff to Promise is one of the album’s catchiest melodic lines. Bluesy, dissonant, and a little electronic, this track brings back the Beatles’ influence, though in a less direct manner and more reminiscent of their later, more psychedelic material at times.

Oy Vey Maria is another bright moment of commentary. Here Greg explores the contrast between religious teachings and the behaviors of humanity, as they seem to drift further and further apart in modern society. The second half of the composition is reminiscent of grandiose church music, with an organ front and center for the duration. The regality of this section combined with the defeatedness in the earlier lyrics makes for excellent contrast, highlighting the two extremes.

An interesting topic appears in One Goodbye. The concept that someday, we will say goodbye to each person in our lives for the last time, is a theme that is occasionally seen in passing in popular music, but not often the focal point of a track. Here it is front and center, presented with dramatic musical flair, thanks particularly to the layers of strings and suspenseful melody. It’s an introspective message paired beautifully with a thought-provoking chord progression that keeps the listener on their toes, never falling into the traps of predictability.

We get a taste of Greg’s disapproval of the state of popular music in the aptly named Pop Song. In between the tongue-in-cheek comments about metaphor and the overwhelming use of the word baby, there’s a little-documented struggle on display here. Many musicians feel the need to create music that fits within the pop genre, but they often struggle to maintain their own artistic identity in the process, and Greg makes several references to this in the first verse: “Stuff creeps in that I want to say, it just comes out that way.” Perhaps most amusingly, the track ends abruptly at 2:59 – because everyone knows a pop song can’t be over 3 minutes long.

Shadows is another dose of heaviness for the album, inspired by a poem by Katina Michael. It’s a haunting tale of obsession and stalking disguised as love. The vocal harmonies in the chorus immediately jump out as notable, providing both richness and tension as an accompaniment to the main melody. The double bass, too, adds complexity and deep warmth and balance to the composition. But once again the lyrics are the star of the show, a chilling, lovesick depiction of someone on the brink of a breakdown:

A welcome criticism of the toxic media cycle appears in Together. With an emphasis on unity and a bright, sweet composition, Greg implores us to put aside the negative news and work together to solve the problems we’re facing in society today. There’s an overall feeling of optimism and hope in this track, carried by the acoustic guitars and the angelic synths present in the musical interlude.

Closing the album is Frogs in a Pan, and it is a well-chosen bookend for the album. Revisiting the opening track’s theme of climate change, this track goes deeper and calls out world leaders for their endless pursuit of power and blatant corruption. Including a memorable horns feature, this is an uptempo, rock-tinged number that – as you might expect – still manages to pack a punch lyrically:

With a lengthy work like this one, it’s difficult to select just one solitary favorite. But early on in this work, there’s one piece that stands out as a particularly exceptional moment, highlighting Greg’s impactful writing and accompanied by a composition that is near perfectly suited to the message.

Throughout this album, it’s clear that the stories and lyrics containing them are often the centerpieces of Greg’s work. Last Post is the first piece to make this statement with conviction; this is a spoken word poem set to music. Greg’s singing has an inviting richness and depth to it, but his speaking voice somehow seems to further amplify these qualities. In this track, he details a brilliantly written poetic rendition of the tales of young, brave men lost to useless wars. The musical composition beneath the poetry is a dynamic, emphatic blend of military rhythms and bugle calls, but the words – visceral, evocative, and painfully honest – are the star of this show:

“Bandage, stretcher, needle, stitch
And each bullet sold makes someone rich.
When pawns on boards or specks on screens
Our decisions seem far less obscene.
No honour, no rules, no cricket pitch
When dying lonely in a ditch
Body parts in flies and sand
Blood in eyes and guts in hand“

Insightful, purposed, and well-rounded. This extensive collection of work from Greg Barnett is a dynamic and contemplative project. With moments of lyrical brilliance around every corner, carried by graceful melodies and refreshingly light production, The Flat White Album is full of excellent commentary on the world, captivating storytelling, and heartfelt lyricism that will resonate with anyone with an appreciation for pensive, forthright singer-songwriter style.

BELOW:  Listen to The Flat White Album and connect with his website and social media platforms. Please support Greg Barnett by visiting him online, and playing, downloading, and/or purchasing his music, or attending a live show! And, as always, thank you for supporting real music!

Listen to THE FLAT WHITE ALBUM by GREG BARNETT: