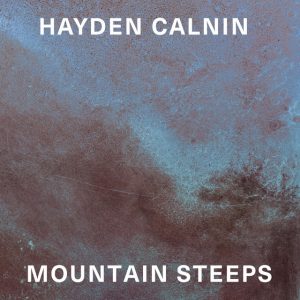 Bon Iver fans – have you heard of Hayden Calnin yet? His recently released single Mountain Steeps is full of ethereal indie-folk goodness that enchants and relaxes.

The Australian based singer-songwriter recorded this track in his home studio on the Mornington Peninsula. This single has been released in advance from his forthcoming EP, Soon Forever, out September 4th. Inspired by a night of vivid dreams, the track was produced with the intention of having an otherworldly feel, and to that end it seems he’s been wildly successful.

Between the celestial synths, spaced-out guitar, and layered, choir style vocals, it’s impossible not to get lost in completely blissed-out, daydream-esque feelings in this track. The build-up is steady and slow, almost anguished at times, until culminating in a big, expressive final chorus and simple fade to nothingness. The small addition of a spacey, effected spoken word exchange at 1:37 is the nail that drives the dreamlike state of this track home. It’s like floating through space as familiar, but ultimately unidentifiable, shadows drift past you in the night – gently, but with purpose.

As far as the vocals and poetic lyrics are concerned, it’s impossible not to draw comparisons to Justin Vernon – the resemblance is difficult to ignore. Even in the intensity and brilliance of the layered harmonies beneath the lead vocal have a similar delivery and tone. But Calnin’s voice carries its own level of soulfulness and keeps a more modern folk edge, and the production skews just a touch more electric, meaning that while the comparison is obvious, Calnin unquestionably has a style and timbre all his own.

Mountain Steeps is the quintessential dramatic indie-folk ballad of the modern age. Indulge yourself in the divine harmonies and mellow production, and keep looking ahead for more as Soon Forever premieres on September 4th.

BELOW:  Listen to Mountain Steeps and connect with his website and social media platforms. Please support Hayden Calnin by visiting him online, and playing, downloading, and/or purchasing his music, or attending a live show! And, as always, thank you for supporting real music!