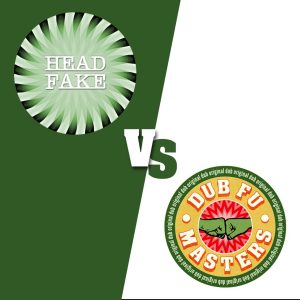 One aspect of life that we’ve lost throughout this tumultuous year is the club scene. Late nights of dancing in crowded downtown hangouts are on pause until further notice. But just because we can’t physically go out doesn’t mean we can’t get in a clubbing mood at home. To do that, you’ll need a soundtrack, and the new collaborative EP from Dub Fu Masters & Head Fake might be just the right one.

Head Fake vs. Dub Fu Masters is a collaborative effort from the two groups, with an aim of rereleasing older Head Fake material with club-like energy. Dub Fu Masters joined the project with a similar mindset, and the result is an up-tempo, danceable EP that is uncomplicated but still unquestionably vibrant.

The EP starts with One Step, a bouncy number defined by plucky synths and light but intricate percussion. The build is slow and deliberate, with an overall simplistic production that makes each additional element that’s added feel purposeful. The addition of the electric guitar around the halfway point adds a fun and unexpected texture.

Trump Funk is a spacey track with more of a driving beat. The heavily distorted vocals, the surf-rock-esque guitar tones, and the complex bass lines all get their moment in the sun here. It’s a great collection of varied tones that keeps you listening intently all the way through this 6+ minute track, without feeling the need to add too many conflicting layers of sound.

This is only a 3 track EP, but it concludes on our favorite song, Overjoyed. With a dark melodic feel at the intro, this track opens into a vocal-driven beacon of positivity. Featuring a memorable hook and bright synths underneath the catchy melodies, it bounces between major and minor tones, creating a varied soundscape that is as engaging as it is well-executed.

Dynamic yet refreshingly straightforward for this genre, this is EDM music at its most pure. For lovers of classic electronic music sounds, this EP will have you on your feet in no time. This collaboration that is Head Fake vs. Dub Fu Masters is full of high notes and hopefully has opened the door to future works between both groups, as this is the kind of electronic music you’ll find yourself pressing play on again and again.

BELOW:  Listen to Head Fake vs. Dub Fu Masters and connect with their website and social media platforms. Please support Head Fake by visiting them online, and playing, downloading, and/or purchasing their music, or attending a live show! And, as always, thank you for supporting real music!