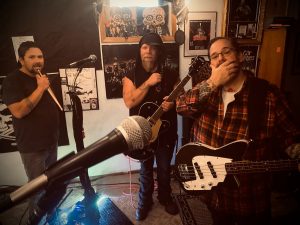 Under the Rug kicks off the proceedings in an up-tempo fashion, with an angsty lyric projecting out from a wall of guitar power chords. The chorus sees the band tip their cap to the pop-punk of the early 2000’s; there is a nice chord shift and emphasis on the vocal melody. At the halfway mark, a super-catchy, picked riff enters the mix and steers the song out of a killer breakdown.

The lyrics to Acetylene use chemical compounds as a clever analogy for volatile personalities and this track delivers just as much energy as the opener. The band showcase their dynamic range well in this one, stripping the parts right back before launching into the screamed refrain.

Forever A.M shows a mellower, more melodic side to the group’s songwriting and uses an extended intro to build tension. The band also lock into a half-time groove which gives the vocal room to breathe in this heart-wrenching song about lost love.

Hush Victoria’s debut shows that the band are here to stay and have some serious chops up their sleeves. Fans of this release will be excited to hear that the group have recorded a full-length album that will drop later this year.

BELOW:  Listen to Hush Victoria and connect with their website and social media platforms. Please support Hush Victoria by visiting them online, and playing, downloading, and/or purchasing their music, or attending a live show! And, as always, thank you for supporting real music!