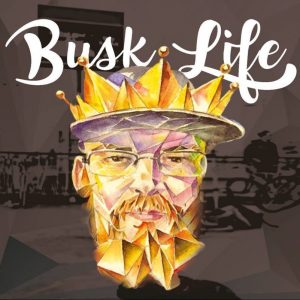 Below, you can read our interview with indie hip-hop artist, Infidelix, and listen to music from his latest album, Busk Life.

Q:  As the legend is told, you left Texas several years back with $100 in your pocket, and flew to Europe with a dream of making it big in hip-hop. You went broke almost immediately, and took to street performing–for pocket-change–to get by, to eat, to survive. So, right here–right now, please “validate”–or–“retell” this legend. How much is true? How much is false? We gotta know!
A:  All of it is true. Yes it is unbelievable, however it’s real. I took on a challenge and I knew that there would be obstacles in the way. I knew that this wouldn’t be easy. But I was ready for that. Was I able to prepare for some of the challenges that came my way? Not really. I simply tackle the problems as they come. Tell you what…it was the best decision I have ever made, though.

Q:  How did you come up with your stage name, “Infidelix”?
A:  Infidelix was created in Denton TX. We are actually a collective of five MCs and called ourselves the Infidels. However, I decided to run solo, changed the name to Infidelix, and took it to places that I didn’t even think I could.

Q:  You’ve been performing on some tough streets across Europe and the U.K. Tell us a couple of your most grimy performance tales, times when it all went sideways…
A:  From junkies, to people wanting to steal and fight, I have been involved with all of it. I can’t remember the craziest time cause during that time I was knocked-out. (lol) However, I also know I have had to defend my spot from people numerous times. From people messing with my crowds, to interrupting my show, you cannot show leniency. You have to be stern and not allow them another opportunity to mess with you. So ask them once—they don’t listen; knock them out—then they listen. It’s just how it works on the streets. 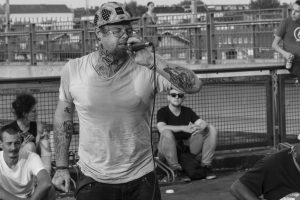 Q:  How much support/contact do you get back home in Texas from friends and family?
A:  I don’t get as much support as I get here in Europe, to be honest. I never got support from my hometown. No one there truly believed in me. It’s only now that I’ve started to make it—they are talking more. However, there’s no help or support from there.

Q:  From your point of view, is Busk Life a thematic project, or is it a collection of random thoughts resulting from one hell of a crazy ride the past few years?
A:  Busk Life covers my trials and tribulations over the past two years in Berlin. From problems with people, to problems with life, to having some really good times. I talk about all of it in Busk Life.

Q:  What’s your favorite track on the album?
A:  Samurai or Faded Memories. Those songs have helped me heal.

Q:  Currently, your an independent artist. Let’s say Interscope calls tomorrow…what do you do?
A:  I think I can live just fine without a major label. Yes, I would take the deal. But that’s because I am 31 and time is ticking. Also, I don’t want to be known for two years—then fade away like most artists signed to labels.

Q:  In that same vein of thought, let’s say tomorrow your career absolutely blows up in the best of ways…what does that look like for you?
A:  It’s great. It means people are responding to my art. That’s the best feeling in the world. And it didn’t come from a label putting millions into promo. It came from genuine people actually liking my music.

Q:  You get to collaborate with anyone you want (dead or alive), who is it?
A:  I would love to work with Rakim. Yes, he is alive and I think he is an absolute legend.