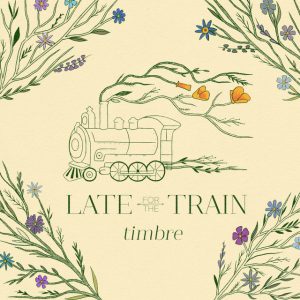 There’s always something special about coming across a folk outfit that melds bluegrassy tones with modern songwriting styles – you know, the Mandolin Orange or Nickel Creek kind of players. Setting themselves up to appear alongside bands such as these is California-based indie-folk string quartet Late for the Train. Their debut album, titled Plant It Or Build It, is set to release on September 4th this year.

The quartet consists of David Pascoe (guitar, mandolin), Laura Benson (fiddle), Thom Beneduci (upright bass), and Josh Haines (mandolin). We were fortunate enough to get our hands on single Timbre, released in June in anticipation of the upcoming full-length album. Mastered by Adrian Dolan (The Wailin’ Jennys), the band says Timbre was written about a “lovers’ quarrel on a cold and stormy night in a drafty camp-style cabin outside Lassen National Park” – perhaps the folkiest of folk-song descriptions imaginable. But that single line really sets the tone for the track – it’s dramatic and purposeful while still maintaining the airy and effortless style that is so critical to the type of folk music they embody.

The track is perhaps most defined by the mournful and intricate violin riffs, flawlessly executed mandolin playing, ever-thumping upright bass, and hauntingly beautiful layers of harmonies. The song moves and grows without ever overreaching, and it builds the instrumentation right alongside the story being told. This is a truly quintessential modern folk song that never misses a note.

Speaking of the musical performances themselves, each member of this quartet is quite clearly undeniably talented in their own right. During the track’s slow build, each instrument is given its own moment to shine, and it serves as a great introduction to the band. That said, we have a soft spot for gifted violinists, and in this case, we’d go so far to say that it’s Laura Benson’s fiddle playing that takes this track from really good and makes it really great.

But we’re not finished, as Timbre is nothing but high notes – the songwriting here is another component not to be left undiscussed. The lyrics penned for this track are as poetic as they are descriptive, painting an illustrious picture that, when combined with the background of the track’s inspiration, creates quite the cinematic listening experience. The expanded chorus at 2:06 has some of our favorite lines:

“I’m wide awake and listening,
Ain’t gonna break the silence ’til I trust that you will meet me there
Don’t be afraid of whispering
It’s getting late and I can feel a bit of morning in the air”

Need another reason to love this talented group of folks? The week following their album release, they’ll be hosting a live-streamed performance at Brand Marinade (2pm on 9/12), raising funds to support the San Francisco/Marin Food Bank. Following the show, the band will be organizing volunteers to distribute food boxes from Farms to Families.

Late for the Train is the real deal; the whole package. Timbre has all of the elements found in the best modern folk music – excellent musical performances from every instrument, perfectly matched and blended harmonies, and high-level songwriting to match. With the release of debut album Plant It Or Build It set for 9/4, now is the perfect time to stream Timbre to prepare. Fans of I’m With Her, Mipso, The Stray Birds, or The Punch Brothers, put Late for the Train on your list of bands to watch. There’s not a modern folk/bluegrass aficionado out there who won’t find enjoyment in these well-crafted batch of songs.

BELOW:  Listen to Timbre and connect with their website and social media platforms. Please support Late for the Train by visiting them online, and playing, downloading, and/or purchasing their music, or attending a live show! And, as always, thank you for supporting real music!

Listen to TIMBRE by LATE FOR THE TRAIN: