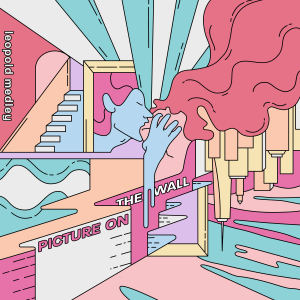 Houston, TX transplant Leopold Medley wasn’t always on a music-led path. He originally had dreams of becoming a filmmaker, but it wasn’t until he was living on his own that he discovered freedom of expression via music. Now living in NYC, Medley is a true one-man-band, writing, performing, and recording all parts of his songs.

Previously Medley has published a number of standalone singles, primarily available on YouTube and SoundCloud, but this year he has released his first full-length, focused, major project with a professional level of production – this is the insightful, modern, folk-pop album titled Picture on the Wall.

Across the board, Picture on the Wall has loads of that quintessential, indie-folk sound that has taken the genre by storm as of late, most clearly seen in the way Medley executes his vocals – doubled, blissed-out, and true easy-listening without ever sounding dated. But make no mistake, this is not a folk record. IDGAF About The Status Quo reminds us of this early on, definitively based in the most modern of pop sounds, with a beat that brings hip-hop to mind for a moment. It’s quite a different sound than the preceding track Acid Rain, with its boomy, orchestral strings and percussion and particularly poetic lyrics, but their differences in production don’t take away from the project’s cohesion as a whole.

Play By the Fire is another stand-out, highlighting some of Medley’s best lyrical work over a particularly well-blended pop-indie-folk hybrid track. Overall you might describe the lyrics on this album as accessibly artistic – Medley seems to stay away from overly flowery language or reaching metaphors, and instead writes stories that feel conversational and casual (oftentimes, this is the harder of these two forms of songwriting). But time and again, within these digestible lyrics there are clear and complex stories:

“‘member when we both grew up?
Thinkin’ that the world was hell
roamin’ through the streets at night
lookin’ for someone to tell
how we were both so damn fed up
with something that had fucked us up?
But now we’re fine.”

Let Me Be Frank Now is a bit reminiscent of the original sound of the Lumineers; simple melodies from the keys, a basic but track-driving, foot-stomping rhythm, and even a hint of acoustic guitar every now and again. It has that raw, unprocessed feeling, but that’s meant entirely as a compliment – it lends authenticity to the song and to Medley’s overall sound as an artist.

We also love the album closer Somebody Like Me, perhaps the folkiest track on the record. Flute-driven with heavy, rustic percussion, this has a sung-around-the-campfire vibe. The instrumentation and melody are simple, and the hook is repetitive, which (when executed well, like it is here), always leads to a catchy, memorable song. We’d be willing to bet that you’ll find yourself humming this chorus long after the album is over.

The album’s leading and title track is by far our favorite. Picture on the Wall features a gorgeous acoustic guitar intro, followed by a gentle descent into an arrangement that settles into a modern and pop-oriented lilt. It has a dreamy, ethereal feel that’s intensified by the heavy vocal effects and easygoing rhythm, but it’s not quite a ballad; there’s energy and drive beneath the easygoing surface of this song. Medley says that this track is “currently my greatest musical accomplishment“, and we’re inclined to agree. It’s a great introduction to Medley’s sound, and it does a fantastic job of encapsulating all of his music’s strongest attributes.

This album has enough familiar elements to resonate with a wide audience, but is artistic and unique enough in its conception and execution that this doesn’t feel like status quo music at all, as promised. Indeed, Leopold Medley has created a wholly individual sound for himself on his first genuine release, and it’s a wonderfully engaging mashup of genres that fit together exquisitely. Perhaps some of Medley’s filmmaking background has rubbed off on his music production skills, as Picture on the Wall feels like a cinematic journey through his artistic tastes and songwriting abilities. Accessible melodies, great arrangements, a fresh style, and quality songs – what more could you ask for? The answer – more music from Leopold Medley in the future, please.

BELOW:  Listen to Picture on the Wall by Leopold Medley and connect with his website and social media platforms. Please support  Leopold Medley by visiting him online, and playing, downloading, and/or purchasing his music, or attending a live show! And, as always, thank you for supporting real music!

Listen to PICTURE ON THE WALL by LEOPOLD MEDLEY:

Leopold Medley · Picture on the Wall