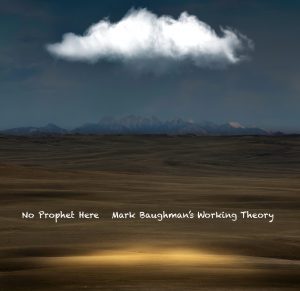 Ohio native Mark Baughman has been a songwriter from his earliest days as a musician. He spent time in his youth pursuing a full-time career in the music business but ultimately decided to trade the lack of stability of an entertainment industry career for one in architecture. But the music never strayed too far from his line of sight (and once a songwriter, always a songwriter). In 2015 Baughman refocused on his writing and dove into the world of rock operas, writing several that were produced on stage. He’s since written a total of four rock operas alongside two additional albums. His project No Prophet Here falls in the “musicals” category, and tells the story of two damaged individuals who need each other but find themselves separated by life.

In the group Mark Baughman’s Working Theory, Baughman plays all the guitars, bass, electronic instruments, and a bit of keys. This album also features Brian Petry (drums), Marco Cremaschini (keys), Jeff Miguel (saxophone), and also features vocalist Mella Barnes on select tracks. This project was completed entirely by internet collaboration, bringing these musicians from across the globe together virtually in Baughman’s home studio. 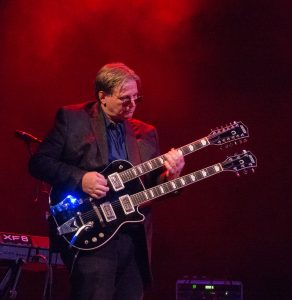 We’re introduced to the wholly authentic rock sound of this group in its first measures by way of a bold electric guitar riff with just the right amount of delay. A Country Like This is driving and vibrant, a melodic piece that shows off the band’s cohesion and synergy (you’d truly never know this was a virtual project unless you were told). This is followed by Skin In The Game, a heavier, punchier number that leans heavily on a driving bassline to keep things moving, giving the track a bit of a prog-rock flavor at times.

Racing to the Bottom was written around the time of the murder of George Floyd, Baughman tells us – though you likely wouldn’t need the preface. The lyrics tell a crystal clear and extremely dark story of a man in the wrong place at the wrong time during the riots taking place last year. The haunting melody and anthemic sound serve only to underscore the real and vivid look into these incidents that Baughman gives us.

We also love This River Won’t Flow. The acoustic foundation of this track gives this track a softer edge, once again allowing the songwriting to shine. And Baughman doesn’t waste the opportunity to do so – this is evocative writing that can only come from a place of personal experience. The second verse is particularly poignant and relatable:

We Could Be Angels is a bright and warm closer for this album, ending things on an optimistic note. In a world that’s increasingly quick to point out the flaws in others, it’s a welcome change to hear something from the opposite perspective. The idea that angels walk among us and that we should all be angels for one another is an important message that speaks to the goodness that’s at the heart of humanity.

Every once in a while we’re lucky enough to come across a track that feels a little like magic – where every piece of the musical picture fits together in such a perfect way that it brings a little bit of otherworldliness into the mix. Somebody’s Daughter is exactly that kind of track. The delicate piano is the near-perfect accompaniment to Barnes’ vocals – a raw, husky tone that just breathes authenticity and believability into the track before it opens up into a soulful rock-blues ballad (don’t sleep on the guitar solo at 3:26, either). And then there’s the songwriting; Baughman delivers us pure, unadulterated poetry from a deep part of the soul, line after line:

“My suitcase is closed and packed
Full of betrayal, and loss, and lies
I dragged it up the stairs
To this lonely room
Where my dreams came to die
But I keep thinking I’m hearing a melody
From another time and place
I can feel him right here
In this room, next to me
I can almost see his face“

This album is a journey on many levels. Below the clear story of the two individuals that No Prophet Here is about, there’s also a deeper, perhaps more meaningful story of one man’s path in and out of music, and the resulting culmination of all of his years of experience. You can hear both the soul and skill Mark Baughman pours into every track on this project. And he’s surrounded himself with the most complementary team to back him up and breathe life and even more musical brilliance into his work. You won’t find a combination of thoughtful songwriting and explosive music in this genre that’s more impressive than the work coming from Mark Baughman’s Working Theory right now.

BELOW:  Listen to No Prophet here and connect with their website and social media platforms. Please support Mark Baughman’s Working Theory by visiting them online, and playing, downloading, and/or purchasing their music, or attending a live show! And, as always, thank you for supporting real music!

Listen to NO PROPHET HERE by MARK BAUGHMAN’S WORKING THEORY: