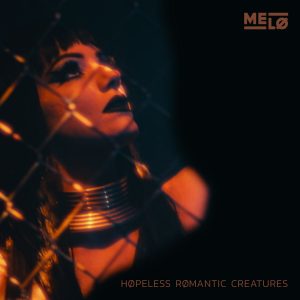 In preparation for the release of his debut studio album, Songs From The Spirit Box, MELØ has been dropping songs left, right, and center. We reviewed his track, Black Leather Fantasy, back in March and now we’re going to take a look at another single from the album, Hopeless Romantic Creatures.

MELØ describes himself as someone who had their head stuck between a pair of headphones for most of their adolescence. The effect of this is clear; he is an artist who has soaked up a multitude of sounds and used them to forge a delightfully unique style. Hopeless Romantic Creatures is a celebration of club culture and feels like the soundtrack to the sexual tension of locking eyes with a stranger on the dancefloor.

In typical form for MELØ, the track features large on 80’s pop influences, presented in a more modern, synth-wave landscape. Retro synths accompany a pulsating bassline and rhythmic dropouts allow room to breathe before the hook comes back in.

MELØ is destined for big things and Hopeless Romantic Creatures is yet another statement of intent by the Canadian singer. Fans of dance music should be highly anticipating the release of his full-length effort.

BELOW:  Listen to Hopeless Romantic Creatures and connect with his website and social media platforms. Please support MELØ by visiting  him online, and playing, downloading, and/or purchasing his music, or attending a live show! And, as always, thank you for supporting real music!