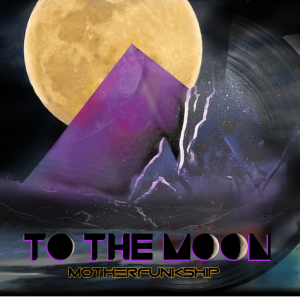 Serendipitous and unanimous passions for the same styles of music created an instant, no-brainer chemistry between the four funksters. Thus, MotherFunkShip (MFS) was born. (A name spawned by Tanksley’s subconscious appreciation of 1975’s Mothership Connection, by Parliament.)

With plans to record their first full-length album, Terrascope, next spring, the boys have recently released their debut EP, To The Moon, an eclectic and talented blend of funk, jazz, hip-hop, and more…

Opening with the rad (yes, rad) instrumental, Yo Momma’s House, I’m not gonna lie—I was chair-dancing immediately. Is it rock? Is it jazz? Is it funk? Is it progressive? Is it structured? Is it improved? Who cares. It’s just damn good. Cograts to the crew of the MotherFunkShip, you made my live show bucket list on track one.

With it’s ultra smooth and jazzy flow, DTF (Down To Funk) picks up where Momma left off. Vocally, the harmonies are reminiscent of early 311. Speaking of which, Dakoda’s flow feels right at home…

“Let me take you back, back to a time before the funk
Sitting in a crown vic, in hard seats and handcuffs
When all I really wanted was to focus on my studies
So I’d flip an ounce of kush just to make some extra money
Cause books ain’t free, and tuition ain’t free
Telling me I can free my mind, if I pay the right fee…” 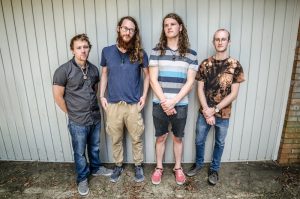 Reasons is an ambient, electric-guitar-driven instrumental which needs no words—and I mean this sincerely. The musical tapestry is rich and inviting as each member takes his respective stroll for a few bars. Very entertaining.

Our Favorite Track:
Without You makes me want to use the word “smooth” again; and then over and over again. Good lord. These guys really have something here. The John Butler-esque vocals are smokey and bluesy; and at 3:40, the track takes a creative and delicious break, which creates the kind of contrast that beckons a tap on “repeat”. And, at the end of the day, I’m a sucker for a well-written redemption song…

“It took some time, but I realized
That my heart beats, well I’m still alive
Without you
Movin’ on set me free
It’s time to fly, yes it’s time to sing
Without you

Now I see that I am better off without you in my life
The sun is shinnin’, see my shadow up and dancing in the light

The boys cap off their debut effort with, Underground, an instrumental bit which is far more complicated than the average ear might realize. Tempo changes, style changes, lead changes, and more. It’s a finale showcase, after-all.

With legitimate vocal prowess, serious instrumental skill, and visionary composition—all which seem impossibly tenured for the group’s tender age—MotherFunkShip’s debut EP, To The Moon, is fundamentally absolute, wildly colorful, highly creative, and generally brilliant. The fact that these guys are huge fans of music shines through like an LED strobe, as each track pays reverent homage to the greats of countless genres and sub-genres before them. Great music just might have its next avatar.

Whose lovechild…?
A funky, cosmic blending of, Sublime, John Butler, and 311…

BELOW, you can listen to MotherFunkShip’s album, To The Moon, check out our interview with them, connect with their website and social media platforms, watch their music video, and find their booking & contact information. Please support MotherFunkShip by visiting them online, and playing, downloading, and/or purchasing their music. And, as always, thank you for supporting real music!

Listen to MotherFunkShip’s album, To The Moon: