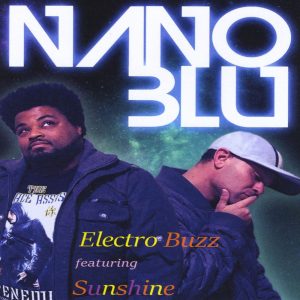 San Francisco, California’s, Pablo Cuneo, has had a wildly interesting and unconventional journey during his evolution of sound.

“…we are beautiful under stress and pain.”

It began years ago in the hard-metal band, Neurotic Delusion; moved then into electro-rock with the band Sexy Northerner; and has now—perhaps—completed the evolution with his EDM (Electronic Dance Music) group, Nanoblu.

Though, to be fair, for Cuneo, it started long before the bands as he has been entertaining crowds since the 5th grade, and on into his years at Laney College, where he was involved with theater, acting in many plays.

With the goal of creating a utopian atmosphere, and describing their sound as an eclectic cross between Pet Shop Boys and Enrique Inglicies, currently, Nanoblu’s trio consists of: Pablo (lead vocals), Myra (vocals), and Louie (beat-box & drums). We’ve gathered today to check out their debut album, Electro Buzz, a synth heavy, ambient production created with one simple intention:  “…even in the darkest light, we should find the more positive way.”

“Nanoblu is a mix of passion enforcing ultimate harmony.”

Opening with, Sunshine, track one sounds like the dance music from some far away disco-galaxy. The trio set an intense and impressive rhythmic precedent that you will find maintained throughout the entire project.

The album’s title track, Electro Buzz, combines a strong 90’s-style electro rhythm with layers of ambient synth and a simple “stay in the moment” message…

“Everyone’s live, go with time, don’t look back, just be inclined, can you believe?”

A straight-up club track, Full Evolution, rides a tastefully frenetic synth loop, while getting hyped on life’s most basic source of bliss and inspiration…

“Night is young, rest in my, sex sex sex, light me up, it’s a Full Evolution.”

Our Favorite Track:
With an intense urgency, Bliss, sounds like something that could’ve been on the Blade motion picture soundtrack. Very cool stuff.

Another rhythmically intense track, and a close second to its predecessor, Bliss, the overall essence of 19th Ave made me think of the Club Hell scene from The Matrix Revolutions. It has more synth, more vocal layers, and plenty of engaging contrast between the two—which, now, are all clearly signature features of the album.

It’s really not all that complicated—sometimes you just wanna say what’s on your mind. The album’s closer is, Asian Girls Rule My World. Need we say more? More catchy synth loops, and yet another finely crafted rhythm sequence make it a fun and memorable way to go out.

Like a full-on, wildly colorful, 3-ring circus of sound, Nanoblu’s debut album, Electro Buzz, is the entertaining sonic equivalent of audio-hang-gliding while chewing your favorite bubble gum. Topnotch mixing and production go a long way and help to make the plethora of complex sounds and rhythms come across seamlessly and without clutter. All in all , it’s a fine effort by this well-intentioned trio.

BELOW:  Check out our full artist interview with Nanoblu, listen to their album, Electro Buzz, connect with their social media platforms, watch their music video, check out their live show/tour schedule, and find their booking & contact information. Please support Nanoblu by visiting them online, and playing, downloading, and/or purchasing their music. And, as always, thank you for supporting real music!

Listen to our artist interview with Nanoblu: