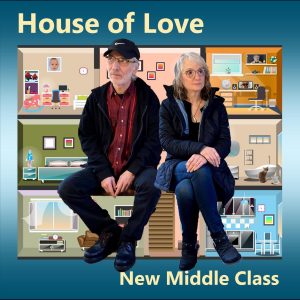 Below, you can read our interview with New Middle Class and listen to their album House of Love. Check out our full music review of House of Love, HERE.

Q: Great to be speaking with you! Your musical history began with a chance meeting in the late ’70s. Care to give our readers some background on how you met and your early years together?

A: [Barbara] I was living in Queens and working as a graphic designer for a music publishing company in Manhattan, where I was surrounded by folk and bluegrass musicians looking to write instructional books. It was a great, fun place to be. During that time I had an epiphany: suddenly I knew that I wanted to sing. Coincidentally I heard through the work grapevine about a band that was looking for a bass player, and my roommate’s boyfriend wanted to audition. The entire group (Mike’s band, with the unusual name of Light Horse Harry) came to our apartment in Flushing to meet him. Because I watched the whole audition so intently, Mike thought that I was the bass player’s girlfriend. The next day he learned from the bass player (who’d passed the audition) that I was unattached, and he asked me out.

For our first date we spent the entire day in Central Park. Mike tried really hard to impress me with his comic book drawings from his sketchbook. There was an outdoor performance of The Pirates of Penzance, and later we heard the Duke Ellington Orchestra at the Bandshell. Mike didn’t have a job at the time (he was giving private guitar lessons and getting extra cash from his parents). I must have been a sucker for guitar players.

Soon afterward, Light Horse Harry needed to replace a departing backup singer. Though I had very little performing experience, I did have a good voice and an ear for harmony and, like I said, that recent epiphany. I passed the audition, and began my journey toward becoming more comfortable on-stage.

Q: You’ve spent quite a bit of time working and living in close proximity to NYC. Do you think being near such a music mecca has influenced the development of your unique style and your career?

A: [Mike] Sure. Here in the tri-state area we’re exposed to so many different kinds of music, and we’ve had the opportunity to perform at an interesting range of venues. With Light Horse Harry we got to play a lot in the NYC coffeehouse circuit, especially the Postcrypt at Columbia University, with our rock band Tour de Force it was C.B.G.B. and other lower Manhattan rock clubs, and as New Middle Class we’ve had the chance to play a wide range of coffeehouses, concerts and festivals in the local area and across the country.

Q: With all of your combined years of experience, it goes almost without saying that your musical identity has gone through a host of changes. Do you prefer your current two-piece arrangement to your prior full-band days as Tour de Force?

A: [Mike] Performing with just the two of us, we’re able to really tune into each other, picking up dynamics and cues, and the format allows the audience to really focus on the songs. And we can rehearse at home, in our pajamas. That said, I really love playing with other musicians, and I miss rocking out with a band. Although Barbara would say that the drums hurt her ears.

[Barbara] The drums hurt my ears (although I really enjoyed dancing and boppin’ to the music)!

Q: How long did “House of Love” take to record?

A: [Mike] Probably a couple of years – with time off in the summers, when we prefer hiking and stand-up paddleboarding to being stuck in the studio. And it took a really long time to mix and then master because, having recorded everything myself, it’s easy to lose perspective. I can’t tell you how many times I asked myself (and everyone I know) if the bass is too loud or not loud enough.

Q: You’ve described your work as “playfully serious, heartfelt, and slightly bent middle-class pop/rock”. That kind of label no doubt leads to pensive, purposeful composition. What is your songwriting process like in order to achieve that sound?

A: [Mike] I like to try writing in different styles, both to challenge myself and because I like to listen to different kinds of music. I seem to prefer songs that walk the line between the funny and the serious, and I like to write character-based songs. The songs tend to grow gradually from some seed, either a musical idea or a title or a bit of lyric, or sometimes something I heard in a dream. “Living in Songland” was written as a theme song for SongLand, a sort of super-group of singer-songwriters who we occasionally perform with. “Human” was my attempt to write a cross between Smokey Robinson and Steely Dan, and “Second Best” was a collaboration with Rick Garcia in the style of early Beatles. In “Monsters From Planet Earth” I picture modern warfare through the lens of a 50’s sci-fi movie. And “If I Ever” is my attempt to write a simple, heartfelt song – which is really, really hard for me.

A: [Mike] That 20-year gap might have had something to do with time spent raising a family and commuting to New York City. Once we got going on the second album it took a couple of years, because it was recorded at our home studio, with me playing most of the instruments, trying to get a sound that could hold up to our first album, which was recorded at a professional studio. It was a major learning curve, and I’m still navigating that curve. Speaking of a prolific future, right now we’re actually recording two albums at once. One will be a themed record titled “Arguing With God”, and the other will be our usual fabulous, diverse and unpredictable collection of all sorts of things.

[Barbara] During that 20-year gap we continued performing and writing. Our kids are now grown, giving us more time to create music and ideas for videos.

A: [Barbara] I took piano lessons as a kid on a second-hand refurbished, rebuilt Frankenstein-ish upright piano which was painted white with gold speckles. It had a great tone. I moved it everywhere I lived and just got rid of it maybe twenty years ago. I still can’t play very well!

[Mike] A Gibson J-50 acoustic guitar. Sold that long ago, but I still have my first semi-hollow-body electric guitar, a cherry-red Gibson Trini Lopez model, which is a variation of the ES-335 but with diamond-shaped f-holes and a Fender-shaped headstock. Many years ago I was on the cover of a book called How To Play Jazz Guitar, and that’s the guitar I’m playing in the photo.

A: [Mike] Do we really want to be on the road for several years, living on a tour bus and playing small clubs across the country, or maybe going big-time and opening for Taylor Swift? Probably not, at this point in our lives. What I’d really like is to have our music heard by lots of people, accumulating a significant fan base, and to play live in venues where you can really relate to the audience and vice versa. It’s nice to think that someone somewhere may be listening to or humming one of our songs at any given moment.

[Barbara] I can hear many of the songs in a TV show or film, and would like our career to move in that direction, as well.

[Mike] Elvis Costello. BTW, he did an amazing collaboration with Burt Bacharach. So maybe Elvis and Burt. And me.

[Barbara] Talking Heads ‘77. I loved this album so much that I was playing it over and over and over, and the building superintendent, who lived in the apartment below me, knocked on the door and screamed hysterically, “It’s incessant, it’s incessant!!” He apparently did not appreciate it as much as I did.

A: [Mike] As a songwriter, this question makes my brain react like the robot in the movie Forbidden Planet, who goes into a self-destruct loop when given an impossible command. I’m going to interpret this question as asking for the best-written song that comes to mind at the moment, and my robot brain says “This House Is Empty Now” by Elvis Costello and Burt Bacharach. It’s overflowing with soaring melodies, unexpected chord changes, really cool rhythms, simple but sophisticated and poetic lyrics, and most of all is beautifully emotional and dramatic. Maybe a bit too dramatic in one spot. Maybe I should have said “Love Me Tender”.

A: [Barbara] I am an expert sourdough bread baker and I bake all of our breads and bagels, too. I find it very satisfying, and delicious.

[Mike] Once upon a time my cartoons were published in the Soho Weekly News, where I had a comic strip for several months called Modern Love, which followed the exploits of a groupie of a fictional power pop/rock band in lower Manhattan.

A: [Mike] Meaning “a public expression of gratitude or recognition”. Number one on my list has to be Barbara, who is my voice and my heart. Also our musician/songwriter friends and collaborators, including (in alphabetical order) Rick Garcia, Joe Giacoio, Dan Pelletier, Carla Ulbrich, and others too numerous to mention.

[Barbara] I would like to thank our long-term fans who have stuck by us for decades and turn up at our gigs and send us supportive messages.

A: [Mike] As we say on the record… “we should be working but instead we’re all living in Songland – music fills our heads”. That pretty much sums it up.

<< Go to our full music review of:  House of Love by New Middle Class

Listen to HOUSE OF LOVE by NEW MIDDLE CLASS: