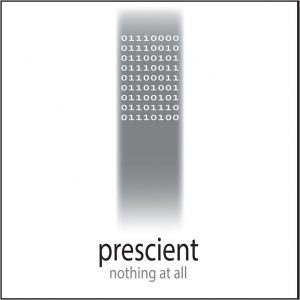 Recently we’ve spent quite a bit of time diving deep into the catalog of Australian singer-songwriter Greg Barnett. Today we’re taking a look at one of Greg’s collaborative works. Co-written with fellow artist Martin Hale, the duo titled themselves Nothing At All solely for the release of Prescient, a full-length album that fully displays the talents of both of these individuals to the highest degree.

It’s not unusual to find strong social commentary in Greg’s work, and on Prescient we find it right off the bat. Using Greg’s interpretation of a speech from Australian Professor Katina Michael (and spoken by her), Martin’s industrial arrangement of The Cloud/Uberveillance – Part 1 is very well suited to the lyrical content, focused on the troubling implications of existing in a surveillance state. The track has a touch of a modern rock feel at times (i.e. the raw and fiery guitar solo at 2:39), but there’s a certain chilling quality to it on the whole that seems to be the most dominating force.

The Coast swings us markedly in the other direction. Here, a gentle layer of ocean sounds leads us delicately into a guitar-led instrumental. This track is smooth and unhurried, and it makes great use of a blend of dark and mysterious passages alongside bright, optimistic moments – it feels very much like a sonic personification of the ocean in its many forms.

While the first two tracks are delivered with elements that combine to make up Greg’s signature style, in Dilmun we get our first clear taste of Martin’s unique additions to the project. One of Martin’s first jobs out of high school was in the Middle East, and in this track we can see the clear influence of that experience on full display. It’s a well-rounded tribute to the style that elevates the components that many westerners are familiar with in eastern music, creating a listening experience that is both easy and enjoyable. The complex percussive textures that are a constant in this track are a definite high point.

Another stand-out from Martin comes shortly thereafter on That Bloke Upstairs. The arrangement here is quite intriguing and incorporates a fairly wide variety of styles, most prominently displaying soft rock, jazz, Latin, and even a few tropical elements. It’s almost playful in execution, which starkly contrasts the track’s heavy theme. Here Martin explores the difficulties and confusion that accompany Alzheimer’s Disease, delivered to us with metaphor and poeticism while still making the message quite clear (and without ever needing to be blunt about it):

“What’s he doing here?
Is he someone I once knew?
If I see your face again
Will I remember you?“

Rich, dramatic strings introduce us to Greg’s You and I. A warm and emotive ballad, the gentle yet unpredictable pattern of the synth creates a bit of a cinematic ’50s rock sound. We also find another moment of societal commentary here in Greg’s signature smart and artistic writing style. He discusses the theme of maintaining and growing relationships in an ever-changing world, urging togetherness, compromise, and doing the right thing.

We also love Another Year as it takes a long hard look at the passing of time. A jangly pop/rock number, there’s quite a bit of back and forth, moving from instrument to instrument and melody to melody, but never relenting or slowing down (perhaps a metaphor for life itself). The horns add a welcome layer of warmth, but the guitar solo alone keeps this track grounded in the rock genre. And at the conclusion of this musical existential crisis, all instruments are silenced to leave nothing but the sound of a ticking clock – “Time’s on your shoulder and time’s gonna win“, indeed.

So often in music, when a talented songwriter takes a personal story and brings it to life in music, the most captivating works are born. On this album we find such an occurrence on Running From Red. Martin’s mother’s family became refugees after the Russian invasion of Prussia during WWII, a harrowing story but fortunately one with a happy ending as the family was reunited eventually. But this track mainly focuses on the very distinct moments of panic, fear, and confusion that accompany such a traumatic event. With fingerstyle guitar a constant element, the song even has a bit of that lonesome Americana feel, full of melancholy and longing. It’s a powerful work that both instills a sense of respect and sorrow into the listener as well as revives an important story that might otherwise be lost to time.

The approach Greg & Martin took with this project as Nothing At All is unique – two artists working mostly independently on a collaboration is no doubt an unconventional method. But for this duo, we find cohesion and synchrony on Prescient. Though there are marked differences between their styles, each writer’s artistic process is honored and displayed in turn, never overshadowing the other and adding to the overall scope of the musical project at hand. And at the conclusion of it all, beyond the quality writing, the smart production choices, the performances and instruments selected with intent – it is clear that the seamless melding of these musical minds remains the most compelling feature of this wonderfully balanced album.

BELOW:  Listen to Prescient and connect with his website and social media platforms. Please support Nothing At All by visiting them online, and playing, downloading, and/or purchasing their music, or attending a live show! And, as always, thank you for supporting real music!

Listen to PRESCIENT by NOTHING AT ALL: