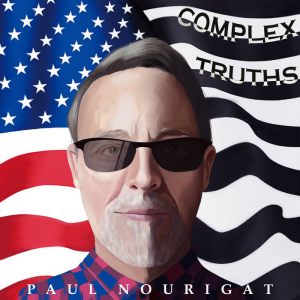 Singer-songwriter Paul Nourigat is a relative newcomer to the world of music but his output has been incredibly prolific – in the last three years, he has released two studio albums and an EP. Nourigat has lived and traveled all over the world and he is known for injecting these experiences into his music; bluesy, Americana storytelling. We are taking a look at his single Bad Cannot Be Good from his forthcoming third album, Complex Truths.

Bad Cannot Be Good is a moody statement of contempt for politicians across the left and right. “You’ll hear ‘em talk in circles / Self-serving views / In denial of the facts / As their crimes make the evening news” is how Nourigat opens the second verse and is representative of the wry, condemning tone that he assumes throughout. The verses take a typical blues form and employ an infectious, Latin groove that is mimicked by the bassline. Nourigat’s vocals are punctuated by snarling guitar bends, echoing the seething attitude of the lyric.

A different chord sequence breaks the song’s blues structure as the band hits the chorus. The drums switch to the ride cymbal and lay down a straight backbeat while the sound of an organ creeps into the mix, giving the section a real lift. Nourigat’s vocal delivery fits the song well; utilizing the half-spoken, half-sung style made famous by the likes of Dylan and Knopfler.

Bad Cannot Be Good is socially-conscious Blues-Rock at its best and is a demonstration of Nourigat’s exceptional development as an artist. The guitar work is killer throughout but the deeper message behind the song is what really shines. The production quality is excellent and should excite listeners for Nourigat’s new, upcoming album.

BELOW:  Listen to Bad Cannot Be Good and connect with his website and social media platforms. Please support Paul Nourigat by visiting him online, and playing, downloading, and/or purchasing his music, or attending a live show! And, as always, thank you for supporting real music!

Listen to BAD CANNOT BE GOOD by PAUL NOURIGAT: