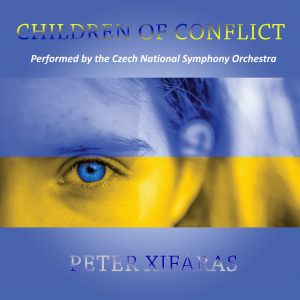 Peter Xifaras is a musical force to be reckoned with. His mastery of multiple genres and instruments is truly impressive, and his ability to cross over between them is even more so. His music has been praised by critics and audiences alike for its originality, emotionality, and sheer power. It’s no wonder that his music has topped Billboard’s Classical and Crossover charts. Xifaras’ music frequently features guest artists from a wide range of backgrounds, and his SymphoneX Orchestra project has attracted international attention. Today we’re taking a closer look at his most recent release, an EP titled Children of Conflict.

Children of Conflict is a powerful work, championing social justice for the world’s disadvantaged and war-stricken children. The six track EP opens with Prologue, which sets the tone for the entire piece as dramatic and intense, lead by driving strings from the Czech National Symphony Orchestra. This is followed by Father’s Lament. Living up to the title from the opening measure, this is a melancholy piece full of longing, bringing to mind sweeping thoughts of a father wanting better for his children than the things the world is handing them. It’s both tender and heart-wrenching in execution.

Further on in the project we find the complementary track Mother’s Lament. The juxtaposition between the two pieces is quite interesting – the first piece utilizing subtler, somber elements while the latter comes through as a desperate, wailing cry. The inclusion of the female vocals brings the perfect amount of authenticity into the track, forging a human connection beyond what instruments alone are capable of, and it is a striking inclusion. We also love the concluding track Epilogue. While it mirrors many of the elements from the EP’s opening track, the cyclical nature of it reminds us that these horrific events that inspired this project’s creation are doomed to repeat themselves if humanity does not make a change.

A standout moment on this project arrives at the track Lost Innocence. Opening with rich bass tones and a foreboding melody, we find in this composition moments of solitude, of despair, and of finality. Glimmers of positivity may shine through at times, brought to life by sweet violins, but there is an underlying heaviness here that is impossible not to get lost in. It brilliantly draws attention to a brutal aspect of war that is not considered often enough, and it does so in a way that perfectly imparts the seriousness and importance of the subject matter.

It can be said with certainty that no matter the project, Peter Xifaras always delivers an unforgettable performance. His passion for music is evident in every note he plays, and his commitment to his craft is undeniable. Children of Conflict is stirring and emotive, and Xifras’ performance is masterful. This is a must-hear work for anyone interested in either social justice or classical music alike.

BELOW:  Listen to Children of Conflict and connect with his website and social media platforms. Please support Peter Xifaras by visiting him online, and playing, downloading, and/or purchasing his music, or attending a live show! And, as always, thank you for supporting real music!

Listen to CHILDREN OF CONFLICT by PETER XIFARAS: