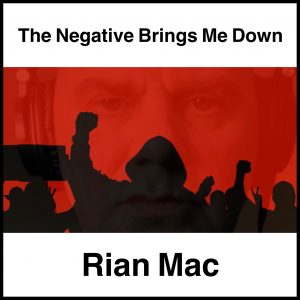 Songwriter and producer Rian Mac is back at the helm of his musical group Rian Music for another powerful single. This time inspired by the boundary-pushing style of Peter Gabriel, The Negative Brings Me Down is a rock anthem featuring Rian Mac on vocals, bassist Curtis Ohlson (Ray Charles), and renowned Irish guitarist Steve Leahy (August Walk, The Sons of Steve McQueen).

“The single is influenced by […] the world that we now live in and how we respond to our lives, the ups and downs of life and how we have to rise above.”

The Negative Brings Me Down walks the line between a modern rock and a retro-pop sound with verifiable success. With a modern rhythm that almost seems to lean in a hip-hop direction at times, it’s a great base for an amalgamation of styles that are backed by serious musical talent. It’s not surprising that the guitar stylings of Leahy are a real highlight of this track, but it’s nonetheless a truly welcome addition – his complex, gritty tone, and intricate (but never overcomplicated) riffs do a great job of keeping the foundation of this track in rock territory.

The message broadcast in this single is ridiculously relevant. Never has there been a more appropriate time for artists to call out against the ills of society, and Rian is unafraid to delve into this territory. The second verse of this single is particularly poignant:

“In time the line we cross creates an open door
sometimes we get that feeling that we’ve heard it all before.
Where politicians and religions selling lies on television
educating generations stealing their imaginations”

Top this off with some super-powerhouse backing vocals and just a sprinkling of string parts to up the drama, and this feels every bit like a present-day battle cry. Driving and intentioned, and completed by a cohesive collection of musical skill – The Negative Brings Me Down is a rock-based, pop-tinged, soulful multi-genre exploration, pushing the boundaries of expectation, just as its creator intended. This expressive, explosive single will be available on January 18th.

BELOW:  Listen to The Negative Brings Me Down by Rian Mac and connect with his website and social media platforms. Please support Rian Mac by visiting him online, and playing, downloading, and/or purchasing his music, or attending a live show! And, as always, thank you for supporting real music!

The Negative Brings Me Down Premieres January 18th