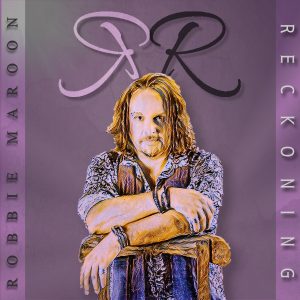 We’ve been anxiously awaiting the release of Australian singer-songwriter Robbie Maroon‘s next album since early this year, starting with his release of the single CyberLoveStory in February and followed by Rewind in late March. Now the full-length, 10-track album has finally arrived. Titled Reckoning, Maroon’s third full-length release is a comprehensive dive into his expansive artistic range, combining soul, jazz, rock, and funk elements into a cohesive, recognizable, and downright entertaining sound.

The Fighter is a hard-hitting way to open the album. With the funk and R&B foundations of the previous two singles, this modern rock-based track is an unexpected but successful change of tone for Maroon to kick things off. The track leans further into a heavier sound as it progresses, with choir-like harmonies and a deep, foreboding undertone. It’s imposing and powerful, and most certainly an attention-grabbing opener:

The funk tones return in full force in Maria, brass and melodic basslines abounding. While the warmth and energy of the track present the listener with something lighthearted and danceable, a closer look into the lyrics reveals a juxtaposition of something a bit more somber – perhaps a love that was never meant to be, or a friendship turned love turned back to friendship. Either way, there’s a clear note of longing and loss in Maroon’s voice: “She sets me free when life is how she wants it to be.”

We’ve used the word addictive to describe Maroon’s music before, and we find that to be the perfect descriptor once again for the opening of My Love. The funky bassline and light percussion are gradually accompanied by rhythmic guitars and smooth synths over a perfectly timed build before the vocals explode into the foreground – it’s an excellent blend of production skills and raw musical talent. And speaking of production, it’s always worth mentioning that this high-end studio sound is fully crafted by Maroon alone, as he serves as his own producer and mixes his own tracks as well. My Love continues to open up into a true retro funk tune, with layers of synths and effected vocals creating an almost psychedelic sound in certain moments, making for a textured and intriguing listening experience.

With a title like Falling Out of Love, one might expect a ballad, but Maroon keeps the energy up all the way through this album. The shift in percussion to a more organic, bongo-like sound is particularly notable, bringing a lighter, almost tropical background element to the instrumentation that becomes especially apparent at the breakdown at 1:47. We also get a fabulous taste of the skills of backing vocalist Talisha Karrer in this track – her work is present across the album, but her vocal interludes in this particular track highlight her clear and powerful voice that pairs so nicely with Maroon’s soulful, gritty tones that are a highlight on each and every song on this project.

We also love I Won’t Be Doing That for creating a bridge between Maroon’s rock and funk elements. Blending crunchy electric guitars with his signature brass sound, this track is a pure genre hybrid that works incredibly well in the context of this album. The moments of spoken word over musical breaks give this track a very contemporary feel whereas so many of his other tracks feel classic in execution, speaking further to his artistic range.

We have a soft spot for a killer Prince tribute, and Maroon has absolutely nailed it with Take a Bow. The album’s most subdued track, this is composed and produced so clearly in the style of Prince that it could as easily be mistaken for a cover of a lesser-known track. It’s brimming with percussive bass, spacey synths, and complete with a sentimental guitar solo at 4:16. Lyrically, the impact that Prince has had on Maroon and his work is crystal clear, with a mournful tone and poetic writing found throughout that no doubt do the subject of this song proud:

“Your star has faded far too soon
Now who will make the sounds you used to
You went and changed our lives, left an empty room
Gave your all, we’re grateful for, hope that you knew”

Maroon also has a music video for the track available with images and video of the late Prince that add to the immersive effect of the tribute.

Electric. Dynamic. Funky to the core. We’re not surprised to find that Robbie Maroon‘s work on Reckoning has surpassed our expectations, but we are absolutely delighted with the skill, quality, and listenability present across the project. From writing to performing to production, there are few others who are doing true solo work as well as Maroon is doing it in his genre. The album feels like an exercise in taking familiar, classic elements and blending them into modern musical excellence. Because this work incorporates so many different styles, it’s easy to say that anyone who can simply appreciate quality musicianship when they hear it will no doubt enjoy this project, but those with an affinity for those classic funk tones with notes of rock and soul will certainly find themselves hitting the repeat button on this one.

BELOW:  Listen to Reckoning by Robbie Maroon, and connect with his website and social media platforms, watch his music video, check out his live show/tour schedule, and find his booking & contact information. Please support Robbie Maroon by visiting him online, and playing, downloading, and/or purchasing his music, or attending a live show! And, as always, thank you for supporting real music!

Listen to RECKONING by ROBBIE MAROON: