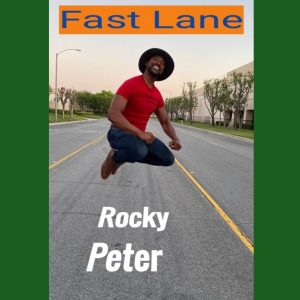 When we say we don’t think anything on earth could stop artist Rocky Peter, we mean it. Born in America, he was abandoned in Africa when he was just two years old. He was then a child slave from the ages of eight to fourteen. He escaped from slavery, returned to the states, and graduated from UC Riverside, only to fall on hard times once more and became homeless. Throughout his incredibly difficult early life, music became a place for him to find solace and peace. (Seriously, read his entire story on his website – it’s an incredible, emotional journey.)

Rocky Peter’s lifelong dedication to his music resulted in a great deal of success, including opening for Stevie Wonder and Nona Hendrix, performances at the 2016 Rio Olympics and at the Nobel Peace Prize Forum, as well as becoming a Hollywood Week finalist on American Idol.

With a backstory so profound and the list of successes so long, the bar is set high for his single Fast Lane. But it does not disappoint. The track is deep, emotional, and an absolute showcase of Rocky Peter’s undeniably impressive voice. We hear the struggles from his past surface in the lyrics early on:

“You try the best you could but is it enough to save the day,
Chasing rainbows every day, dreaming every night for better days”

The production is crisp and each instrument shines through, and the overall tone might be compared to the likes of a stripped-down Adele or Justin Timberlake song – pop, but with feeling. The real star, however, is Rocky Peter’s voice. Crystal clear, with an absolutely massive range and a falsetto for the ages, his voice is strong and passionate. You can hear the emotion in every word he sings, and the weight that he carries behind it. It is his gift of a voice that truly brings his music to life.

We’re honored to listen to music from the likes of people as enduring and strong as Rocky Peter, and we’re thrilled to enjoy being listeners. Fast Lane is an incredible showing of talent, and leaves us hoping for much more music from Rocky Peter in years to come. 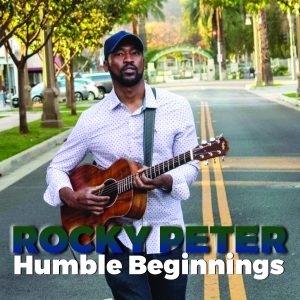 BELOW:  Listen to his single Fast Lane and connect with his website and social media platforms. Please support Rocky Peter by visiting him online, and playing, downloading, and/or purchasing his music, or attending a live show! And, as always, thank you for supporting real music!