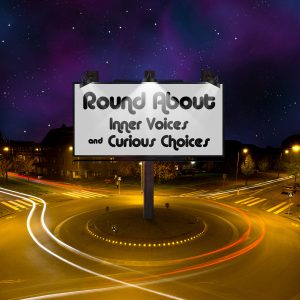 Q: Round About has been around since 2010. What originally brought the four of you together twelve years ago?

A: Our bassist Dave Mehring and I were in a band together in the early 2000s. After that ended we kept in touch, and when we found ourselves back in the DC area in 2010, we reconnected to jam and decided to give it another go. Even though our taste in music and styles of songwriting are completely different, somehow our tunes have always fit together well. Since we started we’ve had a handful of lineup changes over the years, but lead guitarist Aaron Lowenberger joined in 2013, and drummer Phil Raino joined in 2019.

Q: “Inner Voices & Curious Choices” is the band’s fourth studio album. How do you feel your sound has evolved from your first album “Hanging By A Thread” to now?

A: I think the band itself, as well as our sound, has evolved most noticeably in terms of our confidence. I’m proud of “Hanging” and all of our records, but that first one does have a reticence to it. But the trajectory moving on from there definitely moves in an upward direction, and “Inner Voices” really feels like a culmination of our shared experience as performers and songwriters. It was certainly the most comfortable I’ve ever felt in the studio, and I think how we played at these sessions and the final product itself reflects that.

Q: Three of the band’s four members have authored songs on this album. Is it standard practice for members to show up with fully-fleshed-out songs, or is there a collaborative process before a song ‘works’ for the whole band?

A: I don’t think it’s been conscious, but we each bring pretty much fully completed songs, the band runs through them a few times, and it’s usually apparent how the writer wants it to sound. The vast majority of our collaboration is almost always more in arranging than writing. That being said, there’s been occasions where someone makes one small suggestion and it really elevates the tune. More broadly, it’s always been important to me that our band has multiple writers and perspectives, and “Inner Voices” is the clearest example of that in our catalog, which I think is awesome.

Q: How long did “Inner Voices & Curious Choices” take to record? We’ve heard the pandemic made things difficult this time around.

A: Believe it or not, 3 of our 4 albums were completed over long weekends, including this one. We’ve always looked at it like if we prepare well enough ahead of time, and aim for getting clean tracks we’re happy with vs. playing everything perfectly, we’d be happy with the final result, and I’d say that’s turned out to be true by and large. We’re simply aiming to capture snapshots of our songs. It’s an intense, exhausting, yet exhilarating way to do it, but having done it before, and learning from it each time, when it came time to go in for this one (which we originally planned for May 2020), I felt like we were more than ready. As it turned out, that prep was a real blessing given a bunch of unexpected variables (including the pandemic this time) that always seem to materialize during such projects.

Q: With your bassist Dave Mehring leaving the D.C. area, you’ve told us Round About will be moving forward as a duo. What are your hopes for the band as you move into these uncharted waters? Would you consider moving back to a 4-piece if the right person came along?

A: I think for us at this time, it’s more about just taking a break from the degree of logistics, rehearsals, time, and effort it takes to run a full band; replacing Dave would be a big undertaking. Beyond that, Aaron and I have always supplemented band shows with duo performances, and it’s a lot of fun for us; there’s a lot more flexibility and interplay, more stretching out and spontaneity we can incorporate, etc….as for moving back to full band in the future, we’d never say never, but it’s not on the radar right now.

A: My first guitar was a Goya brand acoustic bought for $99. It was a challenge to play as one would expect. My first passable instrument a year or so later was a Sigma dreadnought, and I loved it. Sadly, I don’t have it anymore (sold it to a buddy in college after I upgraded again), but in hindsight, it’d be nice if I did.

A: In very indirect and unplanned ways, I was lucky enough to ‘work’ with a few artists I admire, which ended up being a big part of this album. I’ve long been a fan of Northern Virginia folk legends Eddie From Ohio, and as it happened, over the last few years I took songwriting courses with both of EFO’s primary songwriters, Robbie Schaefer and Michael Clem. The last track on our album (“The Most Important Thing”), was a song that came out of the workship with Robbie, and a few key suggestions he made improved it without question. And after taking Michael’s course, I asked him if he would be interested in contributing some harmonica to the song “A Single Kiss” and he graciously did so remotely, and I couldn’t be happier with the result…so without ever intending either endeavor to yield such results, I’m grateful for their shared time and talents; our record is better for both.

A: So many things determine the answer to such a question, so to avoid too much of a cliche (Beatles’ Revolver), an impactful album for me is Jackopierce’s “Bringing On The Weather” from the mid-90s. In terms of how I came to learn how to play guitar, the role acoustic can play in a rock band, how I perceived writing songs and how to sing harmony, etc., that was probably my first conscious influence. More recently, I also really love Fountains Of Wayne’s last album “Sky Full Of Holes.”

A: It was a lot of fun to work with Blaine Misner at Cue Studios again (for the 3rd time in fact). He’s always been supportive of our band and of my songwriting specifically, and it’s very validating to be treated like an artist by a pro like that in ways that felt genuine and sincere..My bandmates of course deserve all the credit for playing their asses off: Dave and Aaron contributed really good songs and played incredibly, and Phil was like a Swiss watch on drums he was so consistent, while also being a great engine for us. Lastly, I’d have to include our buddy Mark Bower, who has appeared as a guest on all of our albums adding organ and piano; in fact, he’s the only person besides Dave and I to appear on all of our recordings…

<< Go to our full music review of:  Inner Voices & Curious Choices by Round About

Listen to INNER VOICES & CURIOUS CHOICES by ROUND ABOUT: