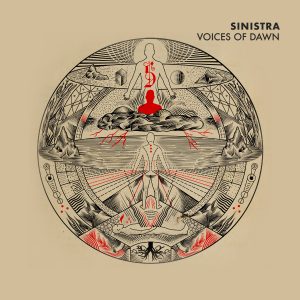 Back with another single is Sinistra, the current musical alter ego of Antonio Masís. Originally from Costa Rica, Masís is a prolific, lifelong musician with a number of accomplishments under his belt by way of his primary band, Pneuma. We recently reviewed his first single that he released as Sinistra, Art of Manipulation, and we found it to have impeccable production, illustrious lyrics, and unique genre combinations. It was a truly enjoyable and masterful track, and history is set to repeat itself on his next single, Voices of Dawn.

Sinistra is Masís’ latest project, where each track is performed by a different cast of musicians. In Voices of Dawn, he’s included Norman Mena (drums), Lucho Aguilar (lead guitars), and Marvin Picado (synths, acoustic and slide guitars), in addition to himself on bass and vocals. He also worked with artist Anthony Aguero to design the artwork for this track. To nobody’s surprise and to everyone’s satisfaction, Masís and his revolving crew deliver once again on Voices of Dawn – this is another stunning example of his abilities in writing, performing, and production alike.

“The best advice I ever got was, ‘If you want to always have friends to play with, learn how to play bass. The world needs bass players.'” – Antonio Masís

Masís tells us that despite Sinistra being a relatively new project, Voices of Dawn was actually written roughly 15 years ago. This track attempts to tackle a subject as mysterious and old as time – the process of dying. He says he’s worked to evoke a number of possibilities through the music: walking through a door, following a path, having an out of body experience, and reaching a heightened state of being.

The music truly lives up to the expectations that Masís has created. The track is a captivating blend of haunting, ominous, and powerful. It takes the listener on a genuine, complex journey, defined in parts by the haunting beginning, the intense and heavy midsection, and the mysterious, ethereal conclusion ending in a burst of static, then silence. Each section of the track tells a piece of the story – it almost feels more like a short film than a song at times. One addition we were particularly fond of is the inclusion of the synths that seem to flit and dance around the track – they’re distinctly reminiscent of shadows you might pass in the dark, on your way to the next dimension.

It’s also completely worth mentioning the lyrics. Like everything else Masís does, they are a pointed addition filled with intent and purpose. He also shows off his vocal chops starting around the halfway point – we’re treated to an impressive showing of range and fire that we’ve not yet seen from him until now. His voice is almost chameleon-like in its ability to go from smooth and cool to dramatic in powerful like the flip of a switch. He is in full-vocal-power mode for one of our favorite verses:

Something we also particularly enjoy is how forward the bass is throughout. It’s not often bass is showcased effectively in this genre, but it seems that Masís’ ability to play this instrument may have helped him to integrate it into this track in an expert way. The low tones help to convey an unsettling feeling in the beginning, drive the rhythm in the heavier section, and provide the perfect celestial tones for the last minute of the track.

Masís has something special going on with Sinistra. The ability to paint such powerful pictures with sound alone is not something that we’ve seen often. This is brilliantly arranged and executed music. And knowing that Masís is managing to execute at such a high level with a rotating group of musicians over every track makes his own range of skills all the more impressive. Voices of Dawn is an enrapturing follow up to his first single, and it has us on the edge of our seats waiting for the next release. 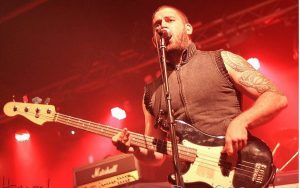 BELOW:  Listen to Voices of Dawn and connect with his website and social media platforms. Please support Sinistra by visiting him online, and playing, downloading, and/or purchasing his music, or attending a live show! And, as always, thank you for supporting real music!

Listen to VOICES OF DAWN by SINISTRA: