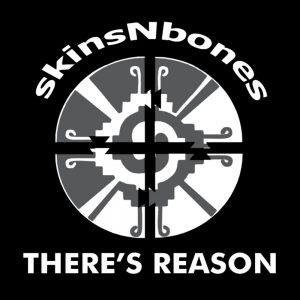 Australia-based rock group skinsNbones is on a definitive mission to get people to think – something the world could use a little more of these days. With their driving modern rock rhythms and straight-ahead feel, this band is well on their way to carving their way into the Australian rock scene.

“Our songs have meaningful and thought-provoking lyrics written about real life issues that extend to social issues and the questions these issues raise.”

This dynamic group formed in December of 2019. Despite the members’ diverse individual backgrounds, they meld together with great cohesive energy as one unit, releasing a total of four singles so far. Their most recent is titled There’s Reason, and it’s a great summation of all the elements there are to like about skinsNbones and cements them as a group on the rise.

Deep bass drum, an iconic rock guitar tone, and a powerful lead vocal kick off There’s Reason – it’s perhaps what Shinedown might sound like if they leaned more in a classic rock direction. It’s a moderately paced track, with enough energy to keep things moving but plenty of time to give each instrument its moment in the sun. The vocals in particular are a high point, with a strong and gritty authenticity to them that really helps tie this track together.

Beyond the well-executed musical elements of this track lies a remarkable message. The band says that they feel a strong commitment to reducing the stigma associated with mental illnesses (which they call simply the “mental difference). This song is dedicated to that cause, encouraging people to change their preconceived notions about the world and open their minds to new ways of thinking, while embracing the individual differences that make us all unique. It’s very difficult to bring positive messages to light in modern music – especially modern rock music – but skinsNbones does it effortlessly, with There’s Reason feeling every bit like an anthem for the rise of a brighter, less contentious dawn for us all.

It’s clear that skinsNbones have a direct and definitive vision for the road they plan to walk as a band, and There’s Reason is a clear stepping stone along it. This powerful and well-written single is out on Bongo Boy Records as of January 5th – come for the quintessential modern rock, stay for the compelling meaning behind the song.

BELOW:  Listen to There’s Reason and connect with their website and social media platforms. Please support skinsNbones by visiting them online, and playing, downloading, and/or purchasing their music, or attending a live show! And, as always, thank you for supporting real music!

Listen to THERE’S REASON by SKINSNBONES: