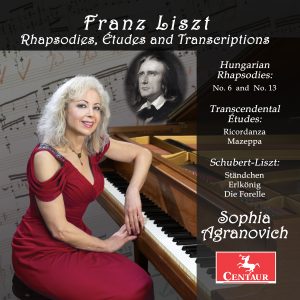 Q: Great to be speaking with you, Sophia! You were born in Ukraine and immigrated to the United States at only 15 years old. How much has your international upbringing influenced your work?

A: Music is a universal language, a “language of the soul”… I think, our upbringing shapes our perceptions and skills, but doesn’t alter much the innate tastes. My native city was a magically beautiful city Chernivtsi, nicknamed “Paris and Vienna in miniature.

I was lucky to have influences that were in sync with what I love the most: art, poetry, literature, ballet, and, of course, music! From the early age I listened to LP record collection of my parents. My father was a stomatologist, and I inherited his scientific inclinations. My mother was an English teacher and translator, wrote poetry, and knew several languages, loved art and music. She started taking me to concerts, opera, and ballet since I was four. She had a beautiful voice, and often sang different opera arias and songs at home. It was a multi-cultural environment. When I came to US, I listened to and studied basically the same kind music, as in my childhood.

My parents were very old-fashioned, and I was brought up with the idea that a woman should dedicate herself to her family and avoid professions with traveling. So, I didn’t plan to be a concert pianist.

Q: Your most recent album is dedicated to composer Franz Liszt. What were the deciding factors that contributed to focusing on his compositions for this release?

A: Liszt is one of my favorite composers. I get spiritually transported into another realm and can fully express my inner passion and nuanced feelings through his music.

It was hard for me to choose what to play for one album. I also had previously released all-Liszt album dedicated to his Bicentennial, and in 2018 – an album with both Chopin’s and Liszt’s works. So, for the current release, I selected my favorite pieces that convey not only Liszt’s brilliant virtuoso “gypsy style”, but also intimate feelings, poetry, and subtle tone colorations.

Q: You gave your first public performance at only 6 years old! Do you remember much of your earliest days as a musician?

A: We had a piano at home, which I was playing by ear. My mother taught me the basics until I started taking lessons with a professional music teacher at the age of five and later entered Chernivtsi Music School.

I was very fortunate to have outstanding teachers, Anna Stolyarevich and Alexander Eidelman, who were among the best in Ukraine. Both of them had studied with Heinrich Neuhaus in Moscow and were peers of Vladimir Horowitz at Kyiv Conservatory in the class of Felix Blumenfeld. When I was ten, I won the First place in the Ukrainian Young Artists Competition, being the youngest participant. In the final round I performed Concerto in E minor by Chopin in Kyiv. I also had played in a lot of recitals, which were broadcast nationwide.

But I didn’t take my playing too seriously, as it came easy to me. In addition, I was interested in so many different things! I was reading both classical literature and science books. I also enjoyed drawing and painting, theater, gymnastics, running and swimming. In school I liked math, science and literature, and was dreaming to be a ballet dancer. I didn’t feel stress practicing and playing in concerts, as I didn’t plan to be a professional musician. I just enjoyed making music in the best way I could.

Q: You have a total of ten solo albums that have been released in the last twelve years. How do you feel your work has evolved across that time period?

A: My first album, “Romantic Virtuoso Masterpieces”, was a collection of my favorite pieces which I could play “with closed eyes”, even after working full time in IT for many years and bringing up my children. After that, each album had a selection of programs that I performed in the year album was recorded. Every collection depended on which composer/work I was infatuated with at that time. With each year the program became more challenging, as I had to learn a repertoire which I had not performed before. But I love the process. Challenge keeps me going!

Q: How long did “Franz Liszt: Rhapsodies, Études, and Transcriptions” take to record? What was the process like?

A: Actually, in 3 hours on one day. Like all my other recordings. I believe in spontaneity over “computerized”, dull “perfection”. Luckily, I play pretty clean and my technique allows me to do it! I perform pieces, as if in a concert: all by memory, of course, which adds to the freedom of expression.

Q: Currently, you are both a performer and a teacher. Of those two aspects of your music career, is there one you prefer more?

A: I love performing and teaching equally! As the sages say, one doesn’t learn anything thoroughly until one teaches it. And it is extremely important to bestow our art and culture to the next generation.

A: My first instrument was a toy piano, and now I still play it in a Steinway grand version!

A: It is exploding now! Never in my wildest dreams, while I was working professionally in another field for 23 years, had I imagined to do what I do now!

A: Hard to choose… Depends on the music and project.

A: Too many excellent albums in all the genres!

A: Depends on the mood I am in…

A: My career had unusual turns and I am extremely grateful to come back to music!

After graduating Juilliard with the Masters Degree, I was awarded a Fellowship and taught Piano for singers and instrumentalists at Juilliard.

Then I entered Teachers College of Columbia University to continue studies towards a Doctorate, but life got in the way and I had to take courses for another job in order to raise a family. So, I became a main bread-winner and I worked 23 years in Computer Technology, the last 7 years of which as a VP/Project Manager. This way I could be with my children every day, instead of traveling and concertizing! I actually loved working with computers and was constantly learning new technology. But I couldn’t deal with office politics, although, as a manager, I enjoyed working with people. Believe it or not, I was practicing piano almost every day, even if it was only 20 minutes. It kept me sane and balanced.

I restarted concertizing and teaching when my children were grown, thus resuming my career in music. At the same time I took courses and received certifications in various Holistic Healing disciplines, Life Coaching, as well as Yoga and Pilates, which I had taught for 2 years at the YMCA!

I also enjoy teaching and have some very talented students of all ages, who win local and international competitions. I teach that hard work, love, kindness and gratitude for what we have will help to survive trials and afflictions and enjoy life.

A: And shout-outs go to my supportive family and friends, to my wonderful colleagues, to my patient recording engineer Joe DeVico, to my students and their dedicated parents!

A: Thank you very much for your time and interest! Hope you will have a chance to listen to my new album and enjoy Liszt’s music as much as I do!

<< Go to our full music review of:  Franz Liszt: Rhapsodies, Études and Transcriptions by Sophia Agranovich