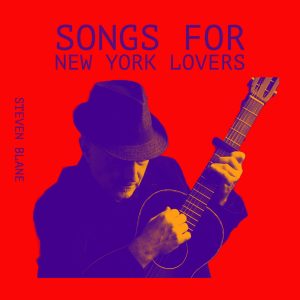 Steven Blane is an artist whose progress we’ve been tracking and writing about for a few years now. The New York singer-songwriter has carved out a style and signature of his own through a string of exquisite albums and singles, incorporating elements of folk, jazz, blues, and rock’n’roll into his brand of Americana. His latest offering leans heavily into the world of jazz and serves as a beautiful homage to the city in which Blane lives. The album, entitled Songs for New York Lovers, consists of 13 original compositions that were recorded in Brooklyn with the help of some wonderful session musicians. Drums, upright, piano, and tenor sax accompany Blane’s singing and guitar-playing, with most of the songs focusing on the themes of romance.

Album opener, Autumn Song, plays off of a delightful contrast between the music and lyrics. Blane muses upon a lover of yesteryear, reminiscing how “She came along and like a song I sang her through and through / And I tasted her words / And I caressed her melody / I call her Autumn’s song”. The melody is sweet and unfolds over a pleasing series of jazz turnarounds, disguising the singer’s lament for a love that vanished in a manner which he has still not quite accepted.

Blane tries his hand at a holiday number with Thanksgiving, channeling the gratitude of the season towards his lover – “And oh how grateful my heart is when you are near / So thanks for the dreams you’re making come true”. The song features a brilliantly technical piano solo, which draws heavily on bluesy motifs, and the last verse deftly employs modulation to spice up the song’s harmonic ideas.

No song on this album quite conjures up images of New York City quite like Coffee and a Rose. In this one, the singer attempts to find his way to a lover’s heart with coffee, flowers, and breakfast after a night of passion. The song is slow and meandering, with a slightly swung rhythm. A beautiful tenor sax solo greets us at the halfway mark, dancing like the sunlight in the singer’s apartment as he tries to convince the apple of his eye to stay.

Steven Blane has yet again proved himself as a truly distinguished songwriter with Songs for New York Lovers, combining a myriad of 20th-century influences in a set of contemporary pop compositions. His voice is flawless and expressive throughout and the instrumentation he employs gives these arrangements a certain sophistication that has characterized his work to date. Bravo! 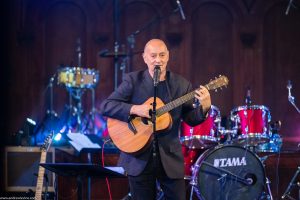 BELOW: Listen to Songs for New York Lovers and connect with his website and social media platforms. Please support Steven Blane by visiting him online, and playing, downloading, and/or purchasing his music, or attending a live show! And, as always, thank you for supporting real music!

Listen to SONGS FOR NEW YORK LOVERS by STEVEN BLANE: