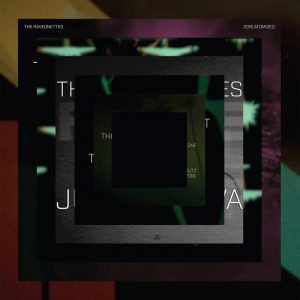 The Danish alt/electro rock duo known as The Raveonettes have just done something wild. Consisting of Sune Rose Wagner (guitar, instruments, and vocals), and Sharin Foo (bass, guitar and vocals), they’ve just completed what’s been dubbed as an “anti-album”. Taking one full year to complete, they set out to record one stand-alone song per month during 2016.

The result is a 12-track collection of songs that are mutually exclusive from one another, and at the very same time, are inextricably linked in mood, theme, and intention.

Here, at The Ark of Music, we were following their project with great enthusiasm. Now, as promised, the songs have been released under the album title:  2016 Atomized. Folks, it was worth the wait.

Opening with The World Is Empty Without You, the duo set a tone for the eleven-track experience to follow with this reverb-drenched, synth-heavy piece of alt-electro pop; a track born of that all too familiar carnal longing.

Excuses is a wild ride alternating between trippy, down-tempo, psychedelic guitar riffs (like something out of a Tarantino film), and a thumping, hip-hop inspired chorus. The contrast works brilliantly with the song’s theme: sacrificing ones sanity in the name of instant gratification… 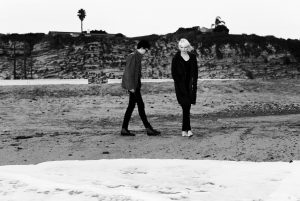 “To be seen with you again
It’s a dead-end
Now it’s weekend
Time to let loose,
Wanna get bruised
F*** your excuse
Hit me with nukes”

Our Favorite Track:
More unrequited love—and one sick bass line—make Scout a most unique experience, and far and away our favorite track on the album. Like many of the songs on this collection, the lyrics are based on a simple, angsty idea (I love you & I hate you), and are then repeated over and over against a somewhat bi-polar musical backdrop. Honestly, it’s brilliant.

Fast Food‘s ethereal symphony of synth creates an enveloping blanket of sound, finished-off with a guitar solo so wildly distorted that it really shouldn’t work…yet it does—completely. Here, on our second favorite track on the album, angst and resentment are replaced by yearning and desire…

The oceans of sound, the strong rhythmic elements, and the lyrical content of 2016 Atomized provide a brand of organized chaos which left me shaking my head more than once:  Shocked by the album’s overall soundscape. Awed by the duo’s ability to wrangle it in and give order and structure to it all. This year-long effort is impressive and very much worth your time.

Whose lovechild…?
A product of mid/late 90’s electro-grunge, 2016 Atomized is like Melancholy/Adore-era Smashing Pumpkins made a record with Garbage.

BELOW, you can watch & listen to The Raveonettes album, 2016 Atomized, connect with their website and social media platforms, and get their booking & contact information. Please support The Raveonettes by visiting them online, and playing, downloading, and/or purchasing their music. And, as always, thank you for supporting real music!

(All 12 songs will play in succession below.)