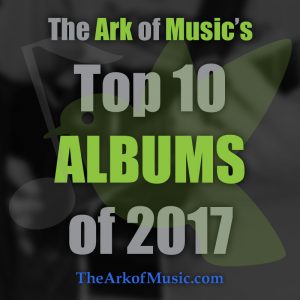 2017 proved to be everything we could ask for from a musical perspective. We were bombarded with wave after wave of indie music which was fearlessly written, masterfully composed, and performed with inspiring appeal.

Before officially launching The Ark of Music in May of 2016, I was a bit of a cynic as it concerned the general state of Planet Earth’s musical culture. Thanks to 2017, I no longer am.

The list below represents what we feel are the top 10 ALBUMS of all those we had the pleasure of reviewing in 2017. We had to make some wildly difficult choices in order to narrow it down. In fact, as you will notice, we included a 4-point Honorable Mention list because we simply could not narrow things down any closer. That said, please visit and/or revisit the albums below; we think you’ll be glad you did.

Thank you to all of our fans, subscribers, and followers for joining us on our musical quest thus far.

Thank you, also, to all of our artists for making such damn good music. We are indebted to you all.

—Noah James Hittner (Creator of The Ark of Music)