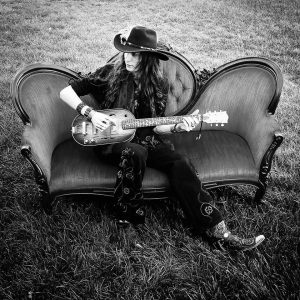 Though you may not be familiar with the name, you’ve likely heard his music, which has been used by Wieden & Kennedy, Dodge Motor Co, Ken Burns, Florentine Films, and more. Over the past few years, Nashville-based roots-blues and Americana artist Justin Johnson has quietly been amassing a cult-like following…and deservedly so.

Already considered a living legend in his own right, Justin’s influences include legendary greats such as:  Jimi Hendrix, Bob Dylan, Jerry Garcia, Leonard Cohen, Muddy Waters, Lightning Hopkins, Robert Johnson, and others. His unique and soulful style can be described in simultaneous fashion as both groundbreaking—and profoundly respectful of tradition. 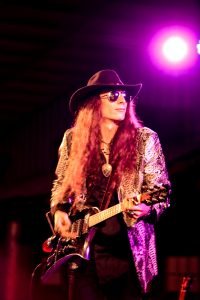 Keeping with the true nature of independent art, Johnson has released two indie-albums to date (2014’s Smoke & Mirrors, and 2016’s If Walls Could Talk), and is currently nearing the end of a successful Kickstarter campaign to fund his next album, DRIVIN’ IT DOWN! But that’s not all. He is also the founder of the Roots Music School in Nashville, TN, which offers building instruction and lessons for aspiring luthiers and musicians. It is through Roots Music School that Justin has partnered with educators across the country to develop roots music curriculum for schools.

My first experience with Justin’s music was on Facebook of all places, as I ran across his recent shovel-guitar video which went viral. (See that video below.) As a vocal-less, instrumental-based musician, one might assume his music is missing something. This assumption would be misplaced, however, as Johnson’s ability to make the strings (of whatever instrument he’s chosen in the moment) sing, is at an uncommon level of mastery, and is quite honestly, fantastic. This is the kind of music that simply does not get old, making it easy to understand why it has been described as blues with heart.

Whose lovechild…?
A touch of Stevie Ray Vaughn, a touch of Junior Kimbrough, and a lot of Justin Johnson.

BELOW, you can check out our full interview with Justin Johnson, listen/watch his music, connect with his website and social media platforms, check out his live show/tour schedule, and find his booking & contact information. Please support Justin Johnson by visiting him online, and playing, downloading, and/or purchasing his music. And, as always, thank you for supporting real music!

Check out our artist interview with Justin Johnson:

Check out some of Justin Johnson’s original live music:

Check out some of Justin Johnson’s recorded music: