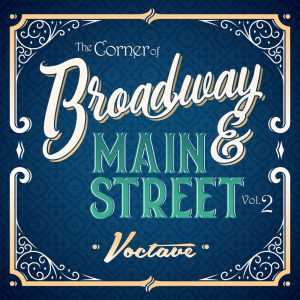 A cappella music is traditionally a quite challenging genre, and one not always easy to excel in. However, when it’s done well, the result is a jaw dropping treat for the ears that never ceases to amaze. Eleven-member a cappella group Voctave fits that bill perfectly on their most recent album.

Hailing from central Florida, Voctave consists of Kate Lott, Tiffany Coburn, Ashley Espinoza, Sarah Whittemore, Chrystal Johnson, EJ Cardona, Drew Ochoa, Jamey Ray, Kurt von Schmittou, Aaron Stratton, and Karl Hudson. They each have their own varied and deep musical roots, ranging from musical theater to pop to contemporary Christian music. The group has been together since 2015, originally created by producer James Ray, and has since signed with Opus 3 Artists, performed with Grammy Award winners, have had songs reach #1 on iTunes, Amazon, and Spotify, and have traveled all over the globe performing for countless fans. Their most recent album is titled The Corner of Broadway and Main Street, Vol. 2, and it’s a stunningly gorgeous, incredibly skillful, and wonderfully intricate collection of Disney and Broadway music.

At sixteen tracks, there’s a lot to dig into on this album, but from the first bars it’s clear that it’s going to be an enjoyable dive that we take headfirst. Opening with the eternally iconic musical spelling of “Mickey Mouse”, the group is so unquestionably in sync with each other that you can’t help but get chills. Disney Parks Medley is just what you’d think, combining all the familiar melodies you’d hear all over Disney World, including classics like It’s a Small World After All, A Pirate’s Life For Me, and I’m Walking Right Down the Middle of Main Street U.S.A. It’s a nostalgia-filled trip down memory lane, delivered by a near-angelic choir of voices.

But this is far from the only nostalgic moment to be found on the record – the group gives us the Disney 90’s TV Medley shortly thereafter. Featuring the themes from hits like Goof Troop, Duck Tales, Winnie the Pooh, Muppet Babies, and many, many others, you’ll find yourself singing along to songs you forgot you knew the words to. Voctave delivers these to us in pitch-perfect, harmony-rich song snippets that delight the listener after every seamless transition.

The album goes beyond simply reminding us of entertainment from days gone by (though it does an excellent job of this alone). It also acts as a brilliant showcase for the talent that the group possesses. In their rendition of Climb Every Mountain, the voices of Voctave blend so perfectly together it’s almost impossible to discern one harmony from the next. The intro to The Prince of Egypt Medley features a wildly impressive, shockingly high-pitched soprano solo that seems to push the boundaries of human ability. Song after song, the best of the best of this group is on display.

A particularly touching moment comes at their rendition of When She Loved Me (though it may be slightly colored by our opinion that this is perhaps one of the best written and underrated Disney songs of all time). The sweet, endearing lead vocal over a meshing of voices that sounds remarkably like an orchestra brings this song to life in such an authentic, heartfelt way – it’ll tug at your heartstrings for sure.

The human voice is unquestionably the most powerful instrument at our disposal, and Voctave has truly put their gifts to work. This is a cappella music at its highest level – no beatboxing, no external instruments, no effects. Simply a collection of some of the best vocals the world has to offer. Though frankly, there is very little that is simple about the execution – these are deeply complex harmonies, delivered without error again and again. It’s the icing on the cake that they’ve chosen such an enduring, magical set of songs as a vessel for their talents. For lovers of so many things – of Disney and Broadway songs, of the abilities of the human voice, of highest-level musical skill and execution – The Corner of Broadway and Main Street, Vol. 2 is for you, and you’d be remiss not to carve out some time to take a listen to this masterpiece.

BELOW:  Listen to The Corner of Broadway and Main Street Vol. 2 and connect with their website and social media platforms. Please support  Voctave by visiting them online, and playing, downloading, and/or purchasing their music, or attending a live show! And, as always, thank you for supporting real music!

Listen to THE CORNER OF BROADWAY AND MAIN STREET VOL. 2 by VOCTAVE: