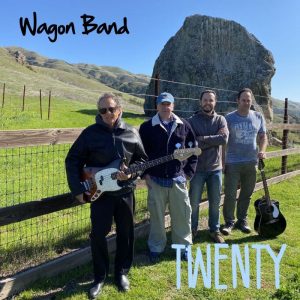 Below, you can read our interview with artist Wagon Band and listen to their album Twenty. Check out our full music review of Twenty, HERE.

Q: Great to be speaking with you, Steve! Wagon Band is based out of Sonoma and Marin counties in California. How has the music scene in the North Bay been for your original music?

A: A majority of the people who are familiar with our music live in the North Bay. And this is where most of our concerts have taken place over the years. Our very first show was performing at the Nova Talent Show on April 10, 2000, in Novato with over 100 people in attendance. We debuted our first song “Be Mine Forever” there. We next performed as the live entertainment at a wedding in San Rafael on October 14, 2000, and gradually began doing more and more shows around Marin and Sonoma counties after that. Also, some of our songwriting has been based around local places and people. We have songs such as “Horse Hill”, “Blackie’s Pasture”, and “Strawberry Patches” that are written about real places in the North Bay. And songs such as “Lake Isabella’, which was written for a local one-year-old girl named Isabella Collins, who is now twenty-one years old. It was a very popular and beloved song by many when it first came out.

Q: Wagon Band has been together for over 20 years. How did the band get started, and how much has changed in the years since?

A: The idea of the band started when I was visiting former Wagon Band guitarist Jose Silva’s house in Novato one day in 1998. He played three songs he had written the music to which he had recorded but had no lyrics for. I offered to give it a try and came up with some lyrics to one of them. But it wasn’t until early 2000 when long-time family friend Charlie Galletta offered to try out as lead singer and my brother Lowell Hall joined as lead guitarist that the band became fully formed. My sister Annie Linden (rhythm guitar) and father Steve Hall Sr. (bass) then also joined the band. And so we started out as a group with six members. Our friends Anthony Gordon (keyboards) and Jessica Anglen (vocals) were later added. Carlo Camarda (drums) played for us at live performances.

Q: “Twenty” is the band’s seventh original album. Do you feel your sound has evolved across each release? Are there similarities between your earliest work and your current album?

A: Our sound and songwriting has evolved quite a bit over the past twenty years. We started out when writing and recording our debut album “Frontier of Dreams” by making a conscious effort to keep most of the songs acoustic and country-sounding the best we could. However, that really limited and held us back from our full potential. We wisely realized that we needed to just accept and go with whatever came out creatively and sounded the best. And that led to what we are now, which is a mixture of country, pop, and rock. We don’t limit ourselves to be defined by a certain genre. There are similarities between our first and seventh albums when it comes to the lyrical portion of songwriting. We like to keep things real by writing about real people, experiences, and places that we have visited. For instance, both albums have songs about Death Valley, a place that the band loves. The first album had “Eeyore in Death Valley” and the seventh album has “Twenty”, which is about the 20-Mule Teams which pulled borax across Death Valley from 1883-1889.

Q: How long did “Twenty” take to record?

A: The recording of Twenty was a long three-year process. COVID hit when we were about halfway through recording, and I wasn’t sure if the album would ever be finished. Our album was co-produced by Lowell Hall and John Rewind. John owns Rear Window Studios in Mill Valley. Both producers were going through very unique and challenging situations in their lives as well. But everyone did the best they could, and our patience paid off as we finished the album properly and are very pleased with the end result.

Q: What is the band’s songwriting process like? Do multiple members contribute or is there a designated individual who handles most of it?

A: I have always personally been the main songwriter of the band, but others put in contributions as well. In looking back at all seven albums, I wrote (or co-wrote) the music to 53 of our songs and wrote the lyrics for 58 of them. Within those, I feel like the best five songs I have written are “Left in the Cold” (which was also the launch single for our new album), “Holly Go Lightly”, “Your Star Has Faded”, “Moonbeams”, and “Sunshine Girl”. But my most treasured songs are the ones I wrote for my wife Daria and son Stefan. I wrote “You Remind Me” and “Seven Years” for my wife Daria. And I wrote “The Best Month”, “Feeding Dinosaurs”, and “If I’m Not Here” for my son Stefan. I wrote “If I’m Not Here” when I was diagnosed with two forms of cancer and wasn’t sure if I’d be around much longer to see my son grow up.

Charlie, Lowell, Anthony, and Jose have also written some outstanding songs. Charlie wrote our hit songs “Song of Life”, “Loving You,” “Summertime”, and “Love Is Forever”. Lowell wrote one of my favorite Wagon Band songs “The Watch”. And because he is a much better guitar player than me, he also helped me refine and improve many of my own demos to turn them into much better songs. Lowell and Anthony co-wrote “Comedy Club”, which is also a personal favorite. And Jose wrote the music for such Wagon Band hits as “Cry On Me”, “Future Boy”, and “Elation”. Our main producer John Rewind also has co-written several of our best songs. His songwriting and production has been incredible through the years and elevated our band to another level.

Q: Can you tell us about the first moment you picked up a guitar?

A: In the early 1990s, Jose arrived in San Rafael after living on the east coast. We soon met and became close friends. When I found out he played guitar, I asked him if he could teach me. And he was happy to do so. I also enjoyed learning by picking up and playing along with my favorite songs on the radio.

A: Fame does not interest me in the least. What does interest me is having the music — the songs themselves, recognized, appreciated, and enjoyed by others. In that regard, I feel like we have already done quite well. Last year, our song “Kickin’ Up Dust” was played in the TV show American Pickers. And this year, our song “Snowy Owl” won Best Song at the Vegas Movie Awards for being included in my award-winning documentary film “Baffin Island: An Arctic Adventure”.

A: We have a song called “Dublin” on our sixth album which features Irish instrumentation with the fiddle performed by John Pedersen, and the flute and tin whistle by Rita Thies. John and Rita are both well-known Marin county musicians. When someone first heard that song, they told me that it was something they could hear U2 performing. So I thought that idea was kind of neat.

A: My favorite album of all time is “Automatic For the People” by R.E.M. That album helped inspire and craft my early songwriting style.

A: My favorite song of all time is “Sunday Morning Call” by Oasis. I think Noel Gallagher is the best songwriter of this generation and I can really relate to this song.

A: That we now have Deluxe Editions of our albums out on streaming sites and digital music retailers worldwide. The deluxe editions include bonus tracks, demos, and alternate versions. As an example, our first album “Frontier of Dreams” was released with 13 original songs. The Deluxe Edition of that album has 32 bonus tracks. So there is a lot of extra material our fans may find interesting to listen to. Also, for some reason our third album “Our Time in Avalon” never showed up on Apple Music. However, it is available to listen to on all other sites.

A: Our band currently consists of myself, Charlie Galletta, Lowell Hall, Steve Hall Sr., and producer John Rewind. But I do want to give a shout-out to past band members Jessica Anglen, Anthony Gordon, Annie Linden, Jose Silva, and Carlo Camarda. I’d like to thank them and let them know their contributions to the band were greatly appreciated.

A: Our new album “Twenty” is intended to be the final release by Wagon Band. But then again, so was our previous album “The End”. So you never know what might happen and if we might decide to write and record together again at some point. But no promises.

<< Go to our full music review of:  Twenty by Wagon Band

Listen to TWENTY by WAGON BAND: