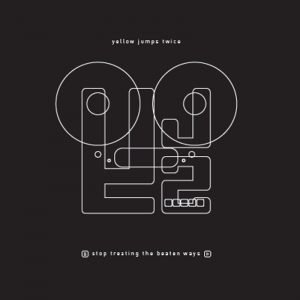 Their fans refer to them affectionately and simply as, the yellows.

Founded in 2000 by Sebastian Teufel; the Hamburg, Germany-based alt-rock quartet known as Yellow Jumps Twice (a moniker acquired during a random game of Monopoly) have been in the music game for some time.

Consisting of:  Sebastian Teufel (vocals, guitars, keys), Christian “Chrischi” Urban (guitars), Frank Lisker (bass), and Christian John (drums), these four know what it means to work, performing in such venues as the Frankfurt International Artist Launch Festival, the Open Air of St. Gallen (Switzerland), the Rock City Club of Bologna (Italy), and the May 1st Festival of Artists and Bands in Vasto (Italy).

Their latest effort, Stop Treatin’ The Beaten Ways, a full-on rock’n’roll collection with plenty of riffs, kicks and rhymes, makes it eleven. Stop for a moment and appreciate that fact.

Opening with This Is Me, Teufel’s vocals echo a blend of Wes Scantlin (Puddle of Mud) and Neil Young. (Don’t try to imagine it…just give it a listen.)

The relatable feelings of ambivalence and indifference make for a grimy, 90s-style jam on Feel Alright. This is a cool tune, with great contrast/dynamics, and super sharp performance and production. 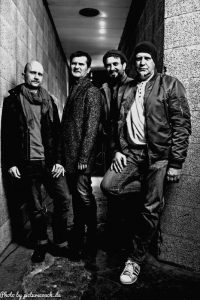 “Hey you,
Don’t you know it’s true
What we went through
Led us to something new?
Hey you,
Listen to what I say
It’s a perfect day
To stop treatin’ the beaten ways…”

Opening with a half-a-minute of charmingly ambient layers of guitar, the album closer, Every Single Day, ends the project with more heart. (Be sure to stick around for the cool synth solo at 3:15.) Teufel shows that an open pair of eyes are both a blessing and a curse, as he asks perhaps the biggest questions of all…

“The ether is filled with lies and hate
These are what’s called, post-factual times
I always tried to listen to my heart
But balance is in danger of falling apart

Accessible writing, solid veteran musicianship, and quality production abound in Stop Treatin’ The Beaten Ways—the 11th album by German musical troubadours, Yellow Jumps Twice. A tasteful blend of old-school, fully-instrumental compositions join with true-to-the-day lyrical content to create an enjoyable listen which is relevant to the times. Those of you who still seek-out hand-crafted music, made the old-fashioned way, will enjoy this album.

BELOW:  Listen to Yellow Jumps Twice’s album, Stop Treatin’ The Beaten Ways, and connect with their website and social media platforms. Please support Yellow Jumps Twice by visiting them online, and playing, downloading, and/or purchasing their music. And, as always, thank you for supporting real music!