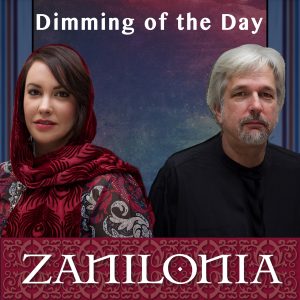 One of the common practices of “virtual” band, Zanilonia, is to take existing songs and recreate them with radically different sonic palettes. This is precisely what we see in their treatment of Dimming of the Day, a gorgeous song of devotion that was initially written by Richard Thompson and sung as a duet with his wife, Linda, in 1975.

David Zee (producer, multi-instrumentalist, and musical director) explains that the decision to cover the song spawned from a fan’s request on a YouTube comment section, and he became intrigued by the song after first listen. He sings the duet with long-time collaborator, Anissa, and their rendition succeeds in bringing an uplifting quality to the tune, compared with the sparse and melancholic original.

Percussion, piano, and electronic drum layers drive the song forward, while the warbly, fingerpicked guitar part echoes the timbre of Thompson’s version, which was primarily comprised of acoustic guitar. The two voices nail the harmonies, remaining faithful to the soaring melody which has inspired many cover versions over the years, including those by notable artists like David Gilmour and Bonnie Rait. An organ-like part enters for the second verse and propels the melody towards the climactic bridge. The rich instrumentation brings a lot of energy to these key moments, and this is an important feature of Zanilonia’s version.

Zanilonia continually impress, with both their progressive originals and thoughtful song adaptations. Dimming of the Day contains all the beauty and intensity of the original but its creative arrangement acts as a conduit for the lyric to shine in a new, modern context.

BELOW: Listen to Dimming of the Day and connect with his website and social media platforms. Please support Zanilonia by visiting him online, and playing, downloading, and/or purchasing his music, or attending a live show! And, as always, thank you for supporting real music!

Listen to DIMMING OF THE DAY by ZANILONIA: