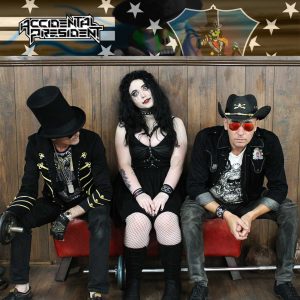 Currently composed of Bethany Neville on lead vocals, Dave Ben Lee on Guitars, and Leon Cadden on Drums, Accidental President combines their musical talents with a high-energy stage show that has been rapidly captivating new audiences. Their self-titled debut album is a dynamic powerhouse of rock, metal, and goth influences that combine with the band’s infectious energy to showcase some serious musicianship. 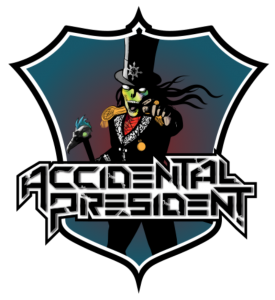 The album opens with a 6+ minute monster of a track, Hopes & Dreams. We get a really great taste of the chops of guitar player Dave Ben Lee – and he’s the real deal, folks. Killer tones and sharp, cutting riffs abound. The vocals don’t join in until over 2 minutes in, but they’re worth the wait. Bethany Neville‘s voice is smoky, powerful, and hard-hitting.

Warrior Soul features a very cool bouncing, delayed guitar intro before crashing into a heavy, head-bang-worthy beat. The guitar solo at 3:13 is another phenomenal showcase of Lee’s undeniable skills.

The melody in the chorus of Hateful departs from the expected and features a really cool harmony line. It’s one of the heavier tracks on the record, but unlike with many other hard rock bands, the melody isn’t lost in the distorted guitars and the band’s desire to be loud. Instead, Accidental President’s production choices give the melody room to shine.

The closing track, Letting Go, starts with a slow build. Delicate, staccato synths and vocals from Neville are in sharp contrast to much of the preceding album. But we end up where we’ve come to expect we might in an Accidental President song – comfortably between the driving, steady drums and heavy, distorted guitars, listening to Neville pour her heart into the vocal line.

For some bands, it could be difficult to follow such a commanding opening track such as Hopes & Dreams, but Accidental President doesn’t slow down a bit with their second track – Rotten Child quickly showcases both Lee and Neville right out of the gate. Drummer Leon Cadden joins shortly thereafter, and we’re marched steadily towards the heavy chorus that’s rife with electric energy. Neville’s genuine emotion unquestionably shines through in this track – the themes of longing to fit in and yet still feeling isolated are carried effectively by her compelling vocals.

Sharp, cutting guitar riffs and tones. Powerhouse vocals that will blow you away again and again. Top-level production that highlights each band member’s strength and brings them together as one powerful unit. It may have taken Accidental President some time to get to their current lineup, but it was well worth the wait. This debut album is an incredibly strong showing of raw talent and honed skill. We suspect this is only the beginning for this hard-hitting trio.  Accidental President has our vote for sure.

BELOW:  Listen to their self-titled album and connect with their website and social media platforms. Please support Accidental President by visiting them online, and playing, downloading, and/or purchasing their music, or attending a live show! And, as always, thank you for supporting real music!