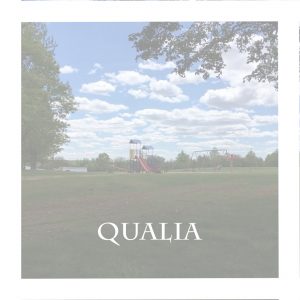 Below, you can read our interview with Alex Stanilla, and listen to music from his latest album, Qualia. Check out our full music review of Qualia, HERE.

Q:  Tell us a bit about your upbringing in Lebanon, PA:  How has that town directly/indirectly influenced your writing and musical style/preferences?
A:  Lebanon is a really small farm town that has very little to offer young people in terms of activities and entertainment, but it seems to have a pretty good talent pool, and is full of really interesting people. Still, with such a lack of happenings, I spent a lot of days in my basement messing around with guitar pedals and recording equipment and digging heavily through Myspace, and other file-sharing networks, looking for bands and artists that had a certain vibe or feel. Now that I’m a little older, I find myself having little issues with sitting down and working on something creative for an entire day. Whereas a lot of my friends that grew up in places that had more going on seem to need a certain fix or amount of stimulation in their day, and they think I’m crazy for locking myself in a room for 8 hours trying to find the right guitar tones.

Q:  Are there any other musicians/artists in the family, or are you the gray duck?
A:  My dad is a really excellent guitar player. Some say he’s the “greatest player in Lebanon County history”. He’s certainly been playing at a really high level for a long time, and he is really efficient in a multitude of genres. Otherwise, my mom’s side of the family is really artistic. My uncle is a magician and my aunt is a really talented artist.  My mom is a really talented decorator, and visual artist, and her father was a cowboy and a rodeo stuntman, and grew up performing in circuses and riding horses. I’ve definitely found a tremendous amount of inspiration from my family.

Q:  You’ve been writing songs since your teenage years. Do you remember the first song you ever wrote? How ’bout sharing it with us?!?!?
A:   I do!  It’s called “Hiding In The Rain”(whatever that means).  It was the first time the whole songwriting thing “clicked” and it was really exciting.  I’m sure I can track it down, it was also the first song I recorded, and I was incredibly proud of it, ha!

Q:  Your music is electronic/analog-instrument based. Please tell the good people what that means, and perhaps explain what it “looks” like to make make/record music in this way.
A:  I try and make it more interesting than it sounds. I’m a pretty rotten drummer, but I like incorporating percussion into my songs so all of the drumming is totally programmed using virtual instruments which are MIDI which is this long, weird acronym that I could write out, but it still wouldn’t really help anyone.  So that’s the electronic side of things, and then I throw guitar and keys over the top, which is the analog part. To make music like this, I usually perch in a corner and setup my laptop that gets plugged into an interface, which allows me to record microphones and guitars into my computer. I then plug my keyboard into my laptop, which acts as a midi controller, and I’ll have a guitar and bass close by. Usually, I’ll position the keyboard and laptop around the corner, enclosing me in, and then I’ll have a guitar or bass on my lap, and manically switch back and forth between programming drum beats, laying down key or synth lines, and fiddling with guitar leads until something starts taking shape. Once I have a huge mess of sounds, I mix it a tiny bit, and then start singing. This process can—and has—gone on for weeks until a song starts surfacing. Sometimes nothing ever comes out of it, but you get a lot of ideas to put towards other songs and future projects. 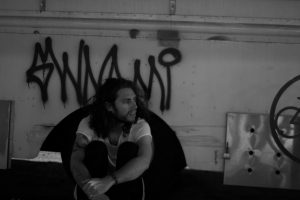 Q:  You’ve mentioned that your new album, Qualia, was an experiment of sorts, which helped you to overcome a creative blockage. Can you tell us about that?
A:  I had recently moved back to Pennsylvania from Seattle, WA, where I had been living for a few years, and I wanted some time to clear my head and work on lots of creative projects I hadn’t really had the time to work on. For whatever reason—maybe the change of scenery or the altitude—my confidence was totally zapped, and pretty much everything I wrote or recorded I’d immediately discard. This went on for about 9 months and I was starting to wonder if I’d ever be able to finish anything. I was also having a really hard time figuring out the programming side of making drum beats and recording guitars over the top, and it was all super frustrating. However, one morning I woke up with the beat to “Arcadia” in my head, and I ran down to my basement and was able to program the beat. Figuring that song out really gave me the confidence to keep programming and incorporating electronic elements into my songs, which is something I felt my songs were lacking. I think I tracked “Arcadia” in a day and then went back through all the songs I had been messing around with from the past couple months and re-imagined them with my new sound. It was pretty exciting and gave me back my artistic mojo!

Q:  Tell us how Qualia’s album title came about?
A:  I was watching the show Year Million (which is a really rad show if you get the chance). The episode was about uploading your consciousness to a cyborg host of yourself in the event of an accident injuring your body beyond repair—but your mind was still capable of functioning. The whole episode was basically Blade Runner, and they were debating what really makes us human.

I had been using the running title of Versificator to name the album, which is a term from 1984, but I wasn’t in love with it, and out of nowhere this guy starts talking about Qualia—which is the internal and subjective component of sense perceptions—and I couldn’t believe what I was hearing. I thought I knew ALL the weird, nerdy sci-fi words. It totally had the sound and meaning I was looking for.

Q:  You’ve also mentioned that the songs were written in a “stream of consciousness” manner with little regard for song structure. Now that the process is complete and you’ve had some time away from the creative/writing, how do the songs look and feel to you?
A:  Well, right now I’m in the process of translating some of the songs to a live setting. Some of them carry over pretty well, but some of them are such a hot mess that I can’t really remember how I even finished them. I’m pretty excited to look back in a year and be like, “what in the world was I thinking?”

Q:  What other instruments do you play or are interested in?
A:  The first instrument I learned was the violin. I also mess around on the ukulele, which is the only instrument I keep at my mom’s house, and a good chunk of this album was written with it.

I guess I have this idea in my head that I’d be capable of being a really tight, high energy drummer, but I’m just not that coordinated.

Q:  Perhaps in some unspecified amount of time, your musical career explodes in the best of ways…what does that look like for you?
A:  Hmm, well, I’d really like to get to a place of influence where I can use it in a really altruistic way. I have a lot of friends who are artists in a number of different medias, and it’d be awesome to be in a place where if they needed crowd-sourcing for their film or something, I could send out a tweet and get lots of traffic going that way. I’d also like to get to the point that I could come up with an idea and enough people would have my back to do some crazy project. Like, film a music video on the moon, or in space. I also have a lot of ideas regarding the way touring works, I’d like to figure out something a little more green and environmentally conscious.

Q:  You get to collaborate with anyone of your choosing—dead or alive. Who is it?
A:  Robert Johnson. I’d love to know what really happened with him at the crossroads. I also really feel he is the godfather of all pop music, when you trace music back it all kinda comes back to him. I don’t even know if I’d want to collaborate, I’d just love to sit on a porch and drink moonshine with him and watch him shred.

Q:  Your favorite album of all time?
A:  Easy. Pet Sounds by the Beach Boys.

Q:  Your favorite song of all time?
A:  Very easy. A Day In The Life by The Beatles.

Q:  What would you like people to know about you that they’re most likely unaware of?
A:  I’m hoping to soon start a blog/website where I find super obscure, young artists and write about them and try and give them exposure, so if you’ve got some music coming out you’d like someone to listen to, hit me up!

Q:  Any shout-outs you wanna make?
A:  A big thank you to my aunt Marla for getting me my first (and only) MIDI keyboard, which really taught me how to make electronic music. My mom for listening to all of my songs and encouraging me to release them. My dad for letting me turn his basement into my laboratory. My friends in the Alden Productions crew who are putting out their first TV series next month through Amazon called, Hapless (which I did the music for). My friend Eric Fletcher for mastering all of the songs and making them sound much better than I’d be able to. Check out the bands Hi Crime (Seattle), Cold Comfort (Seattle), Lore (Lancaster), Marathon (Brooklyn) and Kyle Meadows.

Q:  Anything else you’d like to add?
A:  Yes!  If anyone comes across any of my songs, please take a screenshot and message/tweet/tag me, and I’ll send you a poem or a joke or a demo or something, cool! Thanks!

Listen to music from Qualia by Alex Stanilla:

<< Go to our full music review of:  Qualia by Alex Stanilla