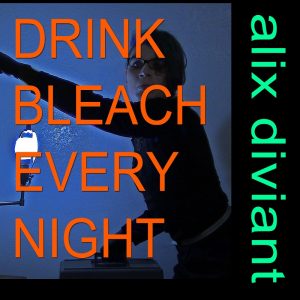 Former comic book artist, video game programmer, actor/director, video editor, and volunteer Tang-Lang Kung-Fu instructor, Alix Diviant found a calling in music along a colorful and adventurous path. Originally from Shreveport, LA, and currently calling Texas home, Alix took the name Diviant (which can be interpreted as an obscure reference to divination—or the practice of seeking knowledge by supernatural means) as a combination of “Divine” and “Deviant”.

With influences such as Nine Inch Nails, The Prodigy, Dr. Dre, Marilyn Manson, David Bowie, The Crystal Method, Kiss, Fatboy Slim, and Gorillaz, Diviant has worked with everything from house to industrial, ambient to trance, hip-hop to trip-hop, and much more. Their latest release, Drink Bleach Every Night, is a wild, electro-eclectic ride, and a clear reflection of these influences. Said Diviant of this latest project:

“The album’s ambient texture was a result of the house I wrote and recorded it in. The house was dark and damp, claustrophobic and cluttered. The roof would leak, and occasionally a wasp would appear out of nowhere. I spent extreme time in total isolation when recording (other than buying groceries in the evening). I would walk down the streets at night between the hours of 3-5 AM, when most of the people were asleep, to buy sodas from a machine a little over a mile from the house… One interpretation of the title has to do with killing parts of your personality, or stamping out your emotions to become an individual less troubled by the negative aspects of what’s in front of you, and instead, more focused on understanding the bigger picture.” 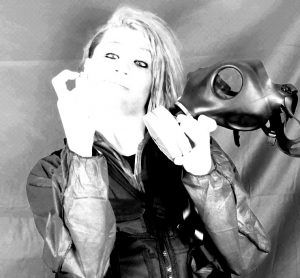 Diviant even experimented with sleep deprivation in order to more effectively weave together the story of dystopian reality around which Drink Bleach is centered. And folks, you can absolutely hear that influence coming through—dreamy and dark.

Opening with Violate To Behave, Diviant creates a dark and menacing environment that sounds like something off 1995’s film score for Seven.

Our Favorite Track:
Set amidst the onslaught of Drink Bleach Every Night’s deep, house and electronica tracks is the lovely instrumental, Find a Way Up. Though we find Diviant’s vocals to be brilliant within the general context of his music, this track is perfect without, and contains only bass, drum, and a tasteful mix of industrial effects.

In a similar ambient vein, Swimming Through The Underwater Castle, another instrumental, rides a hypnotic synth melody-line complimentary to any chill-down evening. The track is clean, simple, and waiting to be put on your latest trip-hop playlist.

Drink Bleach concludes with the full-on, rave-ready Hypnic Stab. At 2:20—2:35 the track reduces brilliantly to bass, drum and subtle vocals far off in the background; then rebuilds again and thumps its way to conclusion.

Never too noisy, never too subtle, in the end analysis, Diviant reveals a somewhat bi-polar project containing one-half sonic acid club tracks like Violate To Behave, Literal Bitches, and Maximum Containment Area, and one-half elegant ambiance from tracks such as Find A Way Up, Swimming Through The Underwater Castle, and Exploring The Homeworlds. It is that very duality—arguably quite Taoist, quite yin/yang—which creates an adventurous ride that makes it easy to appreciate the time Diviant spent alone, in the dark, grinding it out, night after night.

BELOW, you can listen to Alix Diviant’s album, Drink Bleach Every Night, and connect with Alix’s website and social media platforms. Please support Alix Diviant by visiting Alix online, and playing, downloading, and/or purchasing Alix’s music. And, as always, thank you for supporting real music!