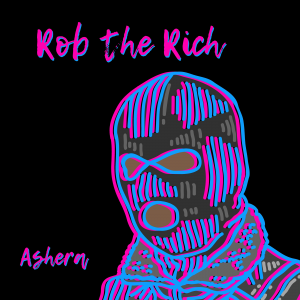 Passionate writing on the most important issues, quintessential folky sounds, and eclectic, electric production choices – these are the building blocks for the music of Portland, Oregon-based band Ashera. Consisting of husband and wife pair Justin and Deborah Norton-Kertson, Ashera is known for messages of social justice, touching on topics like police brutality, patriarchy, and fascism. This neofolk duo has just released their sophomore album titled Rob The Rich, and this ten-track project is as haunting and ethereal as it is impassioned.

The band describes their sound as “antifascist lullabies: beautiful, soft, and soothing war music for the battle against the right.” By and large, this is an excellent descriptor for this project, as unconventional as it may sound. Pulling directly from world events

Case in point, Three Dead in Kenosha references the Kenosha, WI riots that occurred in August of this year. The lyrics describe the shooting deaths in vivid detail, mourning the losses and refusing to excuse those responsible. But in what quickly becomes classic Ashera style, this message is delivered in an airy, gossamer way, with soft and spacey vocals among a big, booming backdrop of sound. It’s haunting and hypnotic.

Other standouts on this album include title track Rob the Rich for its dark country feel and one-line, Robin Hood-esque message, Eat Your Landlord for its bluesy rallying battle cry against those using rent to oppress, and Betray Whiteness for its melodious abhorrence of the ignorance that often surrounds white privilege.

We also love the closer on this album, Who Will Be Next – it’s an excellent summation of the project. This track has such a classic, soft folk sound, full of beautifully blended harmonies, a gentle acoustic guitar, and a generally relaxed energy that might be described as spellbinding. But the lyrics do not align with the instrumentation – this is a song about the systematic persecution of minority groups while the silent majority looks on. The contrast between what’s being said and what’s being played is stark, unexpected, and totally effective at delivering each and every message on this album.

For those looking for music with a message, a purpose; those who prefer to step outside of the mainstream and rally against injustices in a wonderfully poetic way, Rob The Rich is unquestionably for you. In days of turbulent unknowns, of corruption and greed and abuse of power, we hope to always come across artists like Ashera – shining like a beacon in the darkness, determined to illuminate what is right.

BELOW:  Listen to Rob The Rich and connect with their website and social media platforms. Please support Ashera by visiting them online, and playing, downloading, and/or purchasing their music, or attending a live show! And, as always, thank you for supporting real music!

Listen to ROB THE RICH by ASHERA: