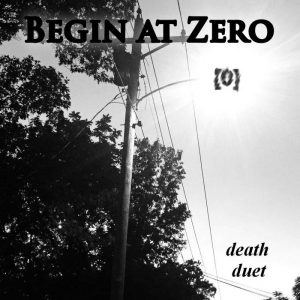 Missouri-based metal/rock outfit Begin at Zero released their most current album back in December of 2019, but it’s now available to the masses by way of online streaming. Death Duet is Begin at Zero‘s third release, but the band has called it “a bit of a departure in style from our previous albums“, citing shorter song lengths, featuring guitar riffs over solos, and discussing more introspective topics.

The band is currently comprised of Chris Spirit Brown (guitar, bass, vocals), and Janelle T. Kaiser (drums, vocals), a reduced lineup consisting of just two of the founding members. They’ve released two albums prior to 2019’s project, Breathing Ash (2014) and Fiction Portfolio (2016). For the band, Death Duet is an exercise in exploring real-life events from their past, and reflection on the development that has taken place since the band’s formation.

The album opens with Life of Chris, and it sets the tone for the power and intent that’s found across this record, the bold choices of chromatic riffs and melodies indicative of a band that isn’t afraid to go after the sounds they’re looking to achieve. Innovation and Execution has a great driving energy, and the spoken word style intermixed with the classic metal scream makes for an intruiguing juxtaposition.

Finch the Wiseass features a guitar line that is a bit more melodic and a touch softer. It feels like a bit of pop-punk influence can be detected in this track, a complementary genre that fits well with the overall tone of the album. A similar style is found on Motherfuckin’ Marty melodically, though the style of playing is reminiscent of more modern rock groups like Foo Fighters.

Kaiser Appears puts the band’s authentic metal & hard rock chops on display, with rapid-fire performances from every instrument. Debut Album enters with a very similar energy but smooths out a bit as it progresses. Including an instrumental at this point in the album is a wise choice; it’s a useful tool to help break things up and allows Brown’s guitar playing skills to be on further display.

Closing the album is another instrumental Logos, and this is by far the furthest the band deviates from their expected sound on this project. Featuring a clean guitar and a lighter, simpler overall tone, this track highlights the band’s capabilities as not just a hard-hitting metal outfit, but a group with range into the more dynamic subsets of their genre. The complex rhythms and gradual rise and fall of this track gives off a very hypnotic vibe.

Modern rock and pop-punk influences, complex instrumentals and riffs, and high levels of energy across the album. This is quintessential, classic heavy metal and rock music that definitively shows off the range of Begin at Zero. This is a band that both understands their genre and is also willing to charge artistically in whatever direction they feel pulled, and that makes for some very authentic sounding music here on Death Duet.

BELOW:  Listen to Death Duet and connect with their website and social media platforms. Please support Begin at Zero by visiting them online, and playing, downloading, and/or purchasing their music, or attending a live show! And, as always, thank you for supporting real music!

Listen to DEATH DUET by BEGIN AT ZERO: