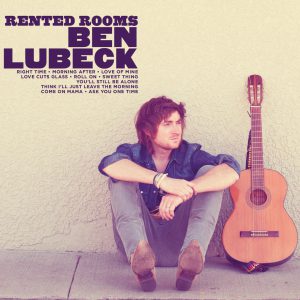 I met Ben Lubeck after a show in a small bar in Madison, WI. He’d just finished performing with his band, Farewell Milwaukee. I was baffled at how few people were there. (A phenomenon to which I’ve been witness all too many times lately, whereby great musical talent goes unheard.) What I remember about Ben that night was this:  It was immediately apparent that the music he writes, and the songs he sings, are the truth.

Having previously released three albums with his band, this Minneapolis based singer/songwriter has now released a solo effort that is more than worth our—and your—attention. Titled Rented Rooms, the album is a love-letter to Ben’s father. In his own words, “While creating these songs, I couldn’t help but think of the many unique corners of the world my dad and I have explored together. There was the time we slept in a dead woman’s bed in Las Cruces, a homeless shelter in Chicago, an unfurnished efficiency apartment in Milwaukee where we ate Thanksgiving dinner on the floor. The walls of these places left an impression on me, but not as much as the time spent with my dad. I will always cherish those days together.” 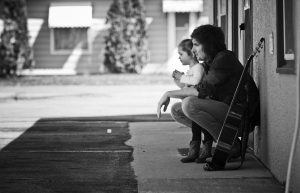 Though Rented Rooms is arguably an album in rare form with no throw-away tracks, here are a few of our favorites…

Leading off is the dreamy and devastating Right time. As the song begins, I couldn’t help but think that such lightly strummed guitar chords have never felt so heavyhearted. If the album is indeed a love-letter, a tribute to time Ben spent with his father, then this song is its anthem. I suspect the profound dynamics of the track, the rise and the fall, the wailing and the silence, mirror the life they’ve shared together. For, this kind of vulnerability cannot be imagined, only lived, witnessed, and recorded… 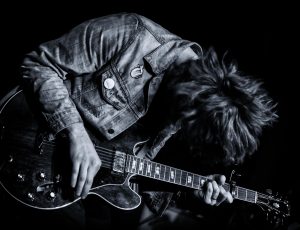 “There’s one thing left in this world, one thing I can control
Now that I know what it is I won’t ever let it go
I may never gain no one but at least I won’t see them go
I’ve made that mistake before
So many times before
Many times before”

In Petty-like fashion, Love Cuts Glass is the result of the inevitable realization that some wrongs will never be righted, some problems will never be solved, and some loves will never experience reciprocity. And, regardless, we must move on… 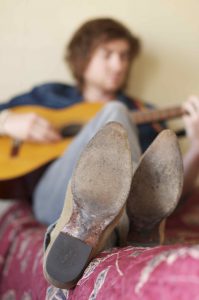 Building slow and steady like a departing freight-train, Come On Mama pleads, without pointing a finger, for the other to simply be loving, to act with love, to chose love…just once…

Listening to Ben Lubeck (and his Farewell Milwaukee boys for that matter) takes me back to modern rock’s epic 90’s era. The emotionally rich Rented Rooms contains great depth, and yet, is utterly free. One gets the feeling that the music, which so gently supports the album’s prose, was born instantly when Ben’s lyrics collided with the musical ether; as if the universe had been waiting for eons for him to simply put the words together. The irony here, as it is with many artists, is that he had to live through all of that madness in order to deliver the music. And, as he did so—and continues to do so—we as fans are nothing more or less…than grateful.

Below, you can listen to Ben Lubeck’s album, Rented Rooms, connect with his website and social media platforms, watch his music video, check out his live show/tour schedule, and find his booking & contact information. Please support Ben Lubeck by visiting him online, and playing, downloading, and/or purchasing his music. And, as always, thank you for supporting real music!

Other Inquiries:  Benlubeckmusic (at) gmail.com