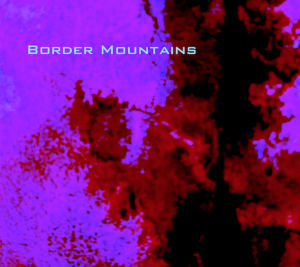 This diverse, experimental melding of art forms has resulted in an evocative combination of art and music. This self titled release by Border Mountains is as eclectic as it is expressive, giving the listener a glimpse into their bold perspective that pushes the boundaries of what one typically expects from an instrumental music album. 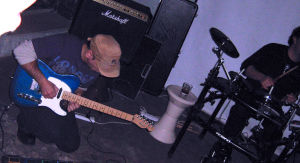 The album opens with the track that inspired the title, Snow on the Border Mountains Pt. 1. Spacey synths and intricate guitar riffs over sounds of the whipping wind paints a compelling picture of iciness and isolation. This is followed by The Creature, featuring spoken word sections pulled directly from Mary Shelley’s Frankenstein, some particularly haunting lines spoken as the track’s instrumentation winds and slithers through a spacey, synth-ridden landscape.

The album progresses through a complex and decidedly dark atmosphere, reinforced by tracks like The God in The Bowl and Flowers of E. A standout is On the Ice / Your Eyes, a monster of a track clocking in at over 8 minutes long. Rooted in progressive and experimental rock sounds, this song is highly dynamic, with plenty of time to move between the driving, high energy sections and more subdued moments, and there are plenty of both.

Rainstorm is a touch softer, bringing some natural sounding elements into the mix to mimic rainfall. A bass driven track, it has an otherworldly, slightly disjointed feel to it, but it serves to really reinforces its psychedelic nature.

The album closes with Entrance. The track order is very intentional; the band says of this unique order: “The album title obviously comes from the leading track ‘Snow on the Border Mountains Pt. 1′  and seeks to provide a semi-literary allusion to the work by having Pt, 1 as the start of the journey, and ‘Entrance‘ as the ending which leads to another destination or state.” So, in listening to Entrance, we leave the world created here on Border Mountains and enter a new one. In the instrumentation here, this is audible – it features tones and synths that are not featured so prominently elsewhere on the record, strongly eluding to the idea that there’s something more coming – either in this fictional world, in the band’s discography, or perhaps even both.

Snow on the Border Mountains Pt. 2 paints perhaps the most vivid images of any song on the track. The melodic, layered guitars, the occasional dissonant note, the otherworldly sound bytes here and there, and the soulful guitar licks every now and again – this feels like a cold, late night in a small cabin on an icy and unforgiving mountain peak, with just a touch of the supernatural hanging about. It’s a great sampling of all the genres that Border Mountains includes in their sound – psychedelic, alternative, experimental, and progressive all rolled into one.

Experimental, psychedelic, dark, and intense. This is an album for fans of music that push the envelope, that moves in directions you wouldn’t expect, and a band that’s committed to their unique vision. Border Mountains has a definitive, progressive sound with a bit of a hypnotic quality. If you’re looking for something unabashedly new, far from any mainstream predictability, this prog-rock journey of an album just might be for you.

BELOW:  Listen to Border Mountains and connect with their website and social media platforms. Please support Border Mountains by visiting them online, and playing, downloading, and/or purchasing their music, or attending a live show! And, as always, thank you for supporting real music!