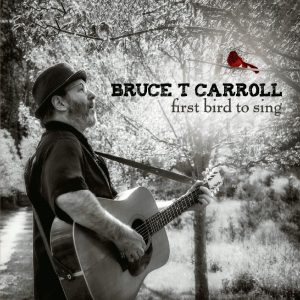 Yonkers, NY based singer-songwriter Bruce T. Carroll has been refining his musical craft since college. In the past five years, he’s completed an impressive trio of full-length albums, Ruckus and Romance (2016), Finding You (2018), and most recently his 2021 release. The project, titled First Bird To Sing, features Carroll on guitar and vocals alongside Lee Falco, Will Bryant, Connor Kennedy, Brandon Morrison, and Sara Milonovich. This 8 track collection of heartfelt singer-songwriter tunes speaks to an individual with wildly impressive storytelling ability, a finger on the pulse of society, and a wise way of blending the two together via a timeless folk sound.

First Bird To Sing opens with the soft, sweet Americana Nobody Knows. Carroll’s voice is immediately the focal feature of this project – his smoky, warm timbre brings the likes of John Prine to mind, but the delivery is a little more Springsteen. The second thing that becomes immediately apparent is Carroll’s songwriting skill – this first track is a deeply reflective piece on the trials and tribulations facing society, but delivered in a classically simple, folky way. Nearly every line in the song is worth quoting, but “your fleet and agile spirit, my old and broken bones” is not only pure poetry, but the juxtaposition in the imagery seems to capture the spirit of the track.

Bluegrassy and twangy, What’s The Rush is full of honky-tonk energy, upbeat despite the themes of time passing and leaving things behind. The fiddle solo at the track’s midpoint is brief but entirely stunning.

The title track First Bird To Sing is a little more rock ‘n roll than the previous two, but it suits Carroll’s voice and writing just as well. The horns add an enjoyable textural element here, and the gospel-choir-like backing vocals add a welcome richness whenever they appear, but it’s the electric guitar solos that steal the show in this one, particularly the second one.

Dragonfly In A Jar is another standout track. The modern folk sound is a perfect vessel for the song’s message, detailing the difficulties of an individual bringing about positive change in the world. There’s an innate catchiness to the melody in this track that makes it one that sticks with you after the album has long concluded.

We also love I Let Go for the bluesy, soulful element that it brings to the record; it’s very country/western in execution. The quick melodic guitar riff in the chorus almost serves as the hook itself, but excellent guitar work abounds across the track. The same goes for the lyrical content – you often see a dip in lyrical quality on many songwriter’s more uptempo tracks, but not in Carroll’s:

“One finds salvation in his pains
One pumps relief into his veins
One drags a pen across the page
On hides his fears
And shows his age
I held on for as long as I could
I held on ‘cause I believed that you would
I held on..
And now I let go”

We’ll make that Bruce Springsteen comparison again after hearing ‘Til It’s Time To Go. There are quite a few similarities to be found despite Carroll’s softer cadence: long lines of lyrics, chord changes that never quite go where you expect, and an exceptionally evocative tale of love and leaving. There’s also a clear sense of authenticity and believability in this track, something not every songwriter can create when telling such intricate stories. It’s measured, intentional, and powerful, and showcases perhaps his finest lyrical work on the album:

“Now there’s twilight thrown everywhere, and a breeze stirs the tree
Window lamps flicker here and there as the sun sets on you and me
Memories of long ago, reminders of me and her
Remember how the sun would glow on the children that we once were” 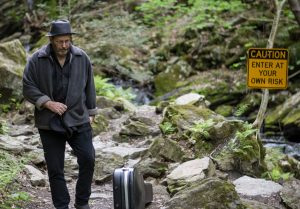 This album is a paramount example of what happens when a great songwriter has a vision for his work. Bruce T. Carroll plays to all of his advantages in this project, highlighting his remarkable storytelling skills, nuanced word choice, gravelly and authentic vocals, and the ability to compile just the right group of players to back him up. Taking us through a range of rock, country, Americana, and blues influences tied together with a folk foundation, The First Bird To Sing is a singer-songwriter masterpiece, full of strong messages, brilliant lyrics, and top-tier musicianship across the board.

BELOW:  Listen to First Bird To Sing and connect with his website and social media platforms. Please support Bruce T. Carroll by visiting him online, and playing, downloading, and/or purchasing his music, or attending a live show! And, as always, thank you for supporting real music!

Listen to FIRST BIRD TO SING by BRUCE T. CARROLL: