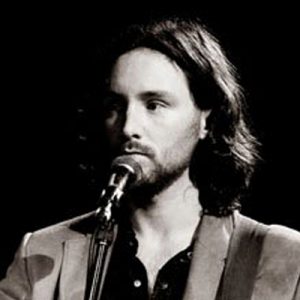 Q:  Tell us about growing up in Toledo. Was it a “typical” childhood? Were your parents musicians as well? Did you always know you wanted to perform?
A:  I grew up in Toledo with my two younger sisters and both of my parents in a fairly typical situation. My Mom’s side of the family is very musical and she taught voice and piano while I was growing up. My father is a psychologist and taught me so much in that area, and raised me to be a true thinker and mindful mediator. I always had a piano in the house and started playing as soon as I could climb up the bench and tinker with the keys.

Q:  Your voice is truly one of a kind! Have you had vocal lessons, or is this something you’ve developed on your own?
A:  At about the age of 12 I was performing original classical pieces that were based off of things I had heard growing up listening to my Mom teach and play to her students. I was never formally taught. But I was playing for hours a day and figuring out all the modes and key variations by ear, and incorporating vocal accompaniment. My voice developed slowly along the way, and it wasn’t until my mid-twenties that it truly became one of a kind. Being able to completely let go and get into a form of meditation during the performances is my secret. I have studied the color and texture of some of my favorite vocalist in order to incorporate them into my own variation and style. Some of my favorites are Susan Tedeschi, Patty Griffin, Amos Lee, Stevie Wonder, and Otis Redding.

Q:  Your a multi-instrumentalist. How many instruments do you play? What would you say is your “primary” instrument (other than your voice)?
A:  Piano, Organ, Guitar, Bass Ukulele, Accordion, Harmonica, Native Flute, Percussion, World Drums, and I’m learning many more. I don’t have a primary instrument because I love playing them equally and in so many different variations. I am a one man band per say, and I play a kick drum pedal attached to an accordion case, djembe, homemade drums made from wooden stools and cardboard/re-used garbage cans, or anything that make a unique kick drum sound that isn’t a kick drum. The kick pedal has an egg shaker attached to it as well. On my other foot there is usually a tambourine/seed pod shaker that creates a unique snare hit sound, as well as a cymbal on the ground that I can play with my left foot or a special drumstick I mounted to a fulcrum point. I either play guitar, keys, uke, or accordion with my hands, a harmonica/holder by my mouth, and the vocals to bring the whole story together in one foot-moving, mindful, musical dance. My new album was recorded in this format with live, single, one take tracks. Its exactly how I sound live, and there were no studio tricks or tinkering with the tracks at all, just basic volume leveling of each microphone.

Q:  Your from Toledo. What brought you to Madison and the Midwest?
A:  I have moved all over the country in the last 15 years, and I am now calling Madison my home and setting up long term plans in this area. I have family living all over the Midwest, and Madison seems to be a very central point for my immediate and distant family. The music scene is thriving here and I love how genuine the city is. The Midwest is a perfect place for me to spread my message. 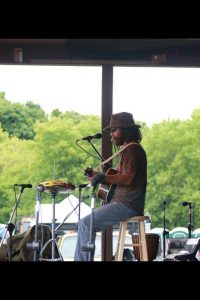 Q:  You’ve biked across the country, touring and performing your music! In how many states have you biked & performed? Tell us your favorite story about your bike tour!
A:  I have been biking to performances for many years now and this past year I have stepped it up a few notches and purchased a long-distance touring bicycle and racks/panniers and have been going on multi-day/week trips across the region while ninja camping in city parks, gardens, and along trails. I toured in Arizona, the U.P. of Michigan, all over Wisconsin, and I used to live in California and am planning a tour down the West Coast for this Fall. This Spring I’ll be traveling to Toledo and back on a sustainable music tour while performing at community gardens, centers, and pantries along the way to promote this new album, which is, in turn, promoting the gardens designated for, or helping, food pantries. My favorite trip was a 300 mile four day music/camping/biking adventure with my 6 year old daughter. We had all our gear packed onto my bike and a custom set up with her on the back rack between the panniers. We traveled from Madison all the way up to Appleton and around Lake Winnebago and back this past summer. I brought some percussion instruments and a ukulele with us that I used to perform at various coffee shops and restaurants along the way, and we camped at some of the most beautiful scenic sites along our journey. One night we camped in a Sand Hill Crane sanctuary and woke in the morning to the prehistoric sounding screeches coming from those beautiful and endangered creatures. The only downfall were the horse flies that could travel faster than my full-out pedaling and had no aversion to our bug spray. My daughter, Olivia, and I were on the bike for 10 hours a day and had some of the most memorable conversations about nature and how we perceive our world. There were occasionally times when we could see the highway that we would have traveled over in petroleum filled vehicles. We talked about how we were saving our world in our own little way, and I promised her that we would inspire others to do the same. We got caught in a warm rain shower at one point and decided to press on despite the clouds, and had a wonderful ride without the presence of those super-fast flies. There were many moments of pure, joyful tears, and I think the muscles that were most sore were those responsible for smiling and laughing.

Q:  Tell us about writing “Make Me A Garden”. How did the lyrics and the melody line come together?
A:  Like all of my songs the words come from an unconscious pouring of thoughts that arise while singing to a new chord structure. I will sing in an improvisational manner and record the experience and later go back and pick what stood out and write it down, and later edit into song format. I was asking spirit to guide me in a direction away from ego and to a place that is medicinal for my soul and well being. I thought that using the element of earth as a metaphor for my soul was a good choice as I could transform a deserted piece of land into a beautiful garden—just like I can mindfully transform negative thought into a wave of positive vibration with song. I wanted to bring a bit of botany into the idea of transforming consciousness through mindful meditation. I tried to use all of the basic elements in this song as we are most likely to feel a connection to nature and our inner essence by using ancient forms of association and imagery. It’s a true Mantra for me, personally.

Q:  Tell us about your forthcoming album. (How many songs? How long did it take to record? Was it recorded live? When can we expect it to be released?)
A:  Make Me A Garden is the name of this 7 song, live album recorded at MMI by some students for a pre-graduation project. The setup included vocals, a kick-drum accordion case and a tambourine/seed pod shaker played with my feet, an acoustic guitar or accordion with my hands, and a harmonica on one of the songs. The entire process took about an hour and each song was done on the first take and kept free from editing other than volume adjustment. This process is extremely important to me because of the raw artistic expression. I think the empty space between the sound is most important. I am officially releasing this album in May at a Seed/CD release at which we will be planting a variety of heirloom vegetable seeds at the community gardens in Madison which are dedicated to the food pantries in the area. This will be the first of many performances and seed releases during my Wisconsin, Indiana, Ohio, and Michigan bicycle/music tour. (I volunteer for the pantries and perform at The River Food Pantry as well as volunteering for MAMA.)

Q:  Perhaps in some unspecified amount of time, your musical career explodes in the best of ways…what does that look like for you?
A:  I would have sponsors from a variety of non-profits which would allow me to go worldwide promoting community gardens and pantries with my musical/bicycle tours. I would fund a community garden app that I’m starting and would take this idea to the next level. I would love to be able to record my 100 or so originals (which haven’t been recorded yet), and share that message with the world. I would continue to travel by bicycle and tour with my one-man traveling bicycle band.

Q:  You get to collaborate with anyone of your choosing. Who is it?
A:  My Uncle Jim.

Q:  Your favorite album of all time?
A:  Supply and Demand – Amos Lee

Q:  Your favorite song of all time?
A:  A Letter from Love To Hate – Avett Bro’s

Q:  What would you like fans to know about you that they’re most likely unaware of?
A:  I don’t drink booze and I live a very healthy and sustainable life.

Q:  Anything else you’d like to add?
A:  Be mindful of your involvement in this world. Also, I am performing on State Street and at the Co-ops daily throughout the year with my one man band set up. Performing on the street is my favorite venue of choice. I love performing for families and folks walking by who aren’t particularly expecting music. It’s the element of surprise that brings people in and usually turns into a full-out dance party in the streets/sidewalks. I’ve also been playing the farmers markets for years now—which is my favorite gig. I feel like I’m creating a song-scape for Madison, and the smiles and dancing feet that surround me are the moments of my purest joy.

Listen to Make Me A Garden by Bryan Drewyor:

<< Go to our full music review of:  Make Me A Garden by Bryan Drewyour