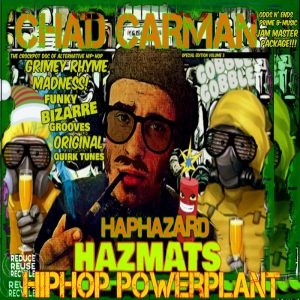 Hip-hop enthusiasts:  You’re about to encounter something, the likes of which, you’ve never encountered before.

With influences that range from RUN-DMC to Weird Al, Public Enemy to Vanilla Ice, Beastie Boys to Fresh Prince, CRS-ONE to Nirvana, to call the MC known as Chad Carman an enigma is, perhaps, the understatement of the millennium.

Dubbing his genre “alternative hip-hop”, he has labeled his satirical brand of grimy, lo-fi, old-movie-sampling rhyme as “B-Music.”

“The performance is mostly tailored with irony, derision, or wit to expose and attack human vice, foolishness, or stupidity. Mostly consisting of sharp sarcasm and dry humor with an overall low-budget old-school theme. This experimental sub-genre of hip-hop I like to call B-Music. Inspired by its predecessor B-Movies.” 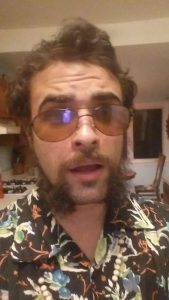 Carman’s latest release, the aptly titled, Haphazard Hazmats HipHop Powerplant, is an 8-track, 16-minute ride that never has a chance to get stale.

Opening with 16 Throwback, the track reminds me of an old Coolio jam, while Carman’s vocals come off like ODB (Ol’ Dirty Bastard).

Ridiculous takes intelligent shots at modern/pop culture with a catchy beat and ultra-processed vocals that sound like a newscaster on some old black and white production. Great grime.

Our Favorite Track:
Rational Log!c is another 90’s style jam that sees Carman spit a bunch of words that rhyme, with no “rational logic” behind them. A hilarious knock on some of the over-vocabularization that can tend to occur in the hip-hop world—at the expense of good ole storytelling. Once again, the flow and beat are classic.

Okay, here’s the deal:  No matter how funny, satirical, or sarcastic he tries to be, Carman simply can’t hide the fact that he’s a solid MC with veteran flow and classic timbre. No matter how off the beaten path he tries to go, no matter how grimy or hissy the sample, the fact of the matter is that Carman is damn good at making hip-hop. The beats are strong, the samples are classic, and he can flow as good as anyone on the market. I dare you to listen to Haphazard Hazmats HipHop Powerplant.

BELOW, you can listen to Chad Carman’s album, Haphazard Hazmats HipHop Powerplant, and connect with his website and social media platforms. Please support Chad Carman by visiting him online, and playing, downloading, and/or purchasing his music. And, as always, thank you for supporting real music!