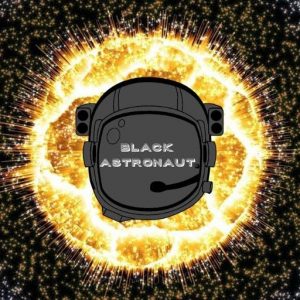 Below, you can read our interview with Charles Luck of Black Astronaut, and listen to his latest album Life On Mars. Check out our full music review of Life On Mars, HERE.

Q:  Charles, your a bit of an enigma, as there is very little information about you online. Tell us about yourself…how did you get started in the hip-hop scene?
A:  I’ve been trying to make hip-hop using my lyrics—with other people rapping and singing them—for 10 years, but I haven’t found a crew until January this year. Ever since then, we haven’t stopped making music.

Q:  Tell us about your songwriting process? How do you get inspired? Do the lyrics come first, or the beats?
A:  It’s usually beats then lyrics. But sometimes, you know, at lunch I’ll just write up a bunch of stuff and make it work to a beat later.

Q:  How did Black Astronaut get its name?
A:  Well, since the album is called, Life On Mars, it just made sense that we were black astronauts…plus it sounds cool.

Q:  You’ve described Black Astronaut as a hip-hop collective comprised of yourself—Lead Songwriter Charles Luck, Rapper/Singer Tino Red, Rappers Gyro, InZane, thir13een, and B Daz; with singers:  Muze, Jonathan BT, Cyr, Zack David, and Addie. How did this group come together? Where are your members from individually? Are they all permanent members?
A:  They are permanent members, but I’m the only totally permanent member. They come from all around the globe:  UK, Sweden, Philadelphia, Kentucky, Chicago, Phoenix.

Q:  Does your group perform live? Where? When?
A:  Because we’re so spread out, it’s gonna take a lot of popularity for the Life On Mars album to get me in a situation where I can round these guys up for a concert.

Q:  Your songs are refreshing and real, without the typical excessive boasting, lying and ridiculous over-glamorization that occurs so often in today’s “pop-hop”. How do you stay level-headed with all of those distractions out there?
A:  I think hip-hop is one of the most important things in the world for culture, and I don’t have it in me to brag. My music is about helping the next guy. Hopefully, some of that rubs off on rap, because rap, right now, is a cesspool for the most part. Music should be a place for our ideals to connect and heal us as a people

Q:  Perhaps in some unspecified amount of time, your musical career explodes in the best of ways…what does that look like for you?
A:  It would feel good, but I’m pretty shy, so I’d be a bit reclusive. I just want to write the stuff.

Q:  You get to collaborate with anyone of your choosing. Who is it?
A:  Paul McCartney, Kanye West, or Eminem.

Q:  What would you like fans to know about you that they’re most likely unaware of?
A:  I spent 10 years trying to form this group, and I’m glad that I found the people to finally do it.

Q:  Any shout-outs you wanna make?
A:  Big shout out to Tino Red, Gyro, InZane, Addie, Sticky Blood, and Eminem for being my main influence and hero.

Q:  Anything else you’d like to add?
A:  I would like to add that this whole process of working with people, and self-promoting, is really hard. But I think it’s worth it because my music can help people, and that’s what I hope it does.

<< Go to our full music review of:  Life On Mars by Black Astronaut