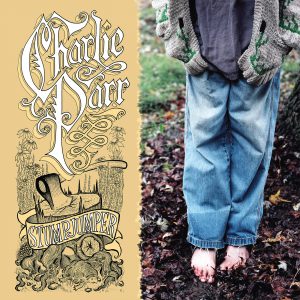 If you’ve never heard of the living legend known as Charlie Parr, then immediately stop what you’re doing—no, seriously, stop everything—and let us introduce you to him right now…

A midwesterner from Austin, Minnesota, Charlie Parr is a true musical journeyman who’s recorded thirteen albums since 2002. Playing 250 shows (or more) every year, he often travels and performs alone. His songs are about love, honesty, justice, deity, and the endless search for a way to have them all coexist within one, singular, basic human experience. He is a poet, a philosopher, and a real-life troubadour. But all of this will mean nothing to you, until you listen to his music.

Recently I had the foot-stomping, head-bobbing pleasure of seeing Charlie perform in Winona, MN for Mid West Music Fest 2016. Dressed in jeans, a T-shirt, and a pair of old sneakers (quite typical in my experience), Charlie’s garb offered no distractions, and was perfectly suited for a man who reserves everything “extra” he’s got for the delivery of his craft.

It was 5:45 pm, he started his set fifteen minutes early. Why not, after all? His fans—of all ages—had already arrived. Why? Because they adore him in a uniquely extraordinary way. It’s almost as if—for his fans—Charlie is that first cold glass of water after wandering for days across a hot & dry, unforgiving desert.

Seated on stage with finger-picks, two electric-acoustic guitars, and a fellow wash-boarder to his left, the show exploded from the gate and never looked back. One hour and fifteen minutes later, I found myself both elated and devastated. Elated that I was gifted yet another live Charlie Parr experience (it had been a year since I’d seen him last), and devastated at the knowing that I’d clearly just seen the most amazing set of the weekend…and it was my very first show of the festival. (BTW, Charlie’s live show/tour schedule is below.) 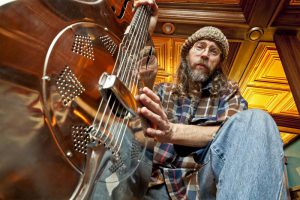 Charlie Parr’s 2015 Stumpjumper represents his first “official” full-band album. Any concerns that the added players might take away from the authentic, lo-fi sound typically associated with a Parr album quickly fade with the album’s first cut, Evil Companion. The song’s opening, infectious riff is only enhanced by the pending keys and percussion soon to follow. Ironically, this upbeat foot-pounder was inspired by what Charlie described as a “sad” conversation he overhead between a couple who “apparently didn’t like each other.” This piece justifies their conflict.

Falcon tells the story of John Tanner, a man who was kidnapped nearly 150 years ago, and left behind an apparently fascinating autobiography. The lick in this tune is, quite honestly, sick.

In Over the Red Cedar, Charlie Parr observes the inevitable passage of time. True to the pure exploration of it all, he offers no solutions, only this diary of aging, sweet and sorrowful.

The album’s title track, Stumpjumper, is an ode to what we imagine are Charlie’s blue-collar roots. Lightning fast finger-picking & slide-guitar tell the story of working people, who have only the brief moments off-the-clock and in-between shifts to celebrate the simple things. Parr’s voice booms…

“We are stumpjumpers
We are cross-tie walkers
We are grownup kids of the working class
And I work when I can
And I ain’t got no money
And I may look rough, but I’m an honest man”

One can hear Charlie’s influences throughout the album, which include legends such as Charley Patton, Lightnin’ Hopkins and Woody Guthrie. Yet, Parr’s voice remains distinctly and uniquely his own.

As a whole, Stumpjumper is raw and authentic, a piece of real music that real music lovers of any genre can appreciate. But there’s more here…this album (and all of Parr’s work for that matter) possesses an intangible value. Though difficult to identify, it has something to do with the fact that Mr. Parr dares to produce and inject truth and meaning into a culture that, currently, seems to turn arrogantly away from anything that causes one to think or feel sincerely. His music, scarred and weathered, is completely and totally vulnerable. And, in an age of cynicism and entitlement, Charlie’s vulnerability is not only rare, it is essential.

Below, you can listen to a music/interview combo for Charlie Parr’s Stumpjumper, connect with him on his website and social media platforms, watch his music video, check out his live show/tour schedule, and find his booking & contact information. Please support Charlie Parr by visiting him online, and playing, downloading, and/or purchasing his music. And, as always, thank you for supporting real music!

Watch Charlie Parr’s music video for the song Over the Red Cedar: