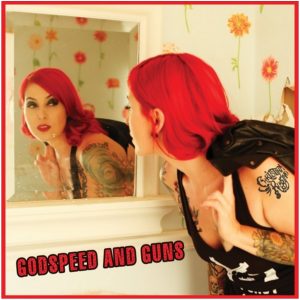 With scorching red hair, psychedelic tatts, and a voice reminiscent of the legendary Cher, the Brooklyn native indie artist, Christina Rubino knew by age seventeen that music was going to be her path.

Though previously involved with New York area bands like Violator and Josephine, the Irish-Italian Rubino has since set out on a solo quest, which has most recently resulted in her latest album—the occasionally dark, occasionally joyous, occasionally raw, occasionally refined, and always entertaining:  Godspeed & Guns.

Opening the album with Down To The Sea At Daybreak—a beautiful, angst-filled ballad to her own spirit—Rubino wastes no time placing not only her vast array of musical influences—but also her intentions—on display. Her influences on this epic opener, one could argue, are everything from OG punkers, Green Day, to pop-punker Pink (and much of what may lie between the two). But more importantly, her intention seems to be brutal honesty, to such a degree as to suggest that anything less might mean the end… 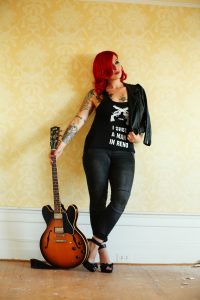 “Give me back my reason to sing
I have it all, but I feel I’ve lost everything
Cold and sensitive lifetime filled with longing
Every night cut open, bleed the morning”

“God knows nothin’ can remain the same
Because the wind blows and shatters all that remains
Then something wakes me up from a long, sad, depressing sleep
Then it breaks the locks before I can look for a key”

Identical Strangers, though also lyrically melancholy, has a Steve Miller Band-esqe vibe with its mellow, hazy, and slightly psychedelic guitar tones throughout.

Our Favorite Track:
With its crisp and sharp engineering, musically-speaking, Shadow Of A Ghost reminds me immediately of a massively underrated band called Carolina Liar. Vocally, the stylings of Heart and Ann Wilson come to mind. (Yeah, it’s a solid track.)

“Give me back my reason to sing.”

—Christina Rubino, Down To The Sea

Rubino, however, is not all electric guitars and distortion. Proving once again that the best things in life are a result of contrast, she has graciously included the sweet and gentle acoustic guitar-based Feather, as well as piano-centered tracks like Orbit and Lullabye. Serving as odes to motherhood, love, and the confounding nature of any kind of relationship, these three tracks represent a uniquely honest bit of songwriting that is absolutely not concerned with convention or cookie-cutter composition. They are adventurous and emotional. Most importantly, they make you want to listen ’till the end.

All in all, Godspeed and Guns is a sultry and delicious sonic ride, loaded with heartfelt, compelling content. Ultimately, it’s Rubino’s smokey, Melissa Etheridge-like voice, in combination with her solid, honest songwriting, and great overall studio production, that have created something that can grab—and hold—your attention; something that is—at its core—highly entertaining.

BELOW, you can listen to music from Christina Rubino’s album, Godspeed and Guns, connect with her website and social media platforms, watch her music video, and find her contact information. Please support Christina Rubino by visiting her online, and playing, downloading, and/or purchasing her music. And, as always, thank you for supporting real music!

Listen to the single, Down To The Sea, from Christina Rubino’s album, Godspeed and Guns: